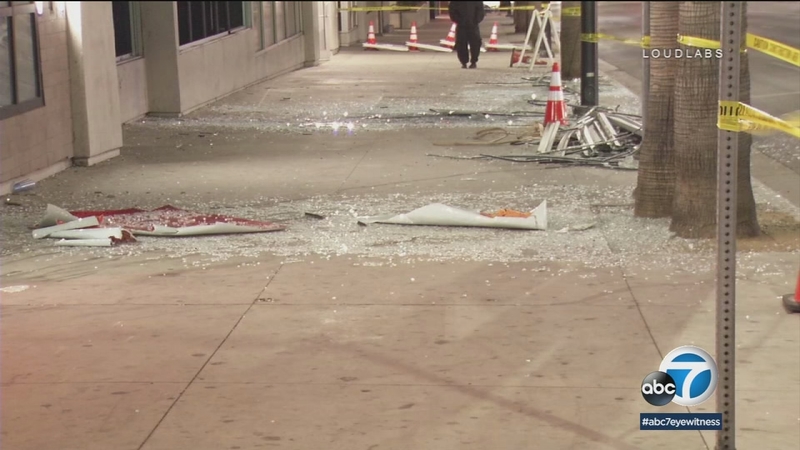 Los Angeles firefighters headed to the scene in the 1700 block of North Highland Avenue around 7:30 p.m. Officials said the explosion happened at the Tinhorn Flats Saloon and Grill, a vacant commercial restaurant on the first floor of a seven-story, 270-unit apartment building.

The first floor above the restaurant in the building was evacuated as a precaution, according to fire officials. The rest of the tenants on the upper floors were temporarily asked to shelter in place.
EMBED More News Videos

The owner of Ripley's Believe It or Not captured footage of glass all over the street in Hollywood after a natural gas explosion rocked a vacant restaurant in a multi-use building.

Witness Nina Firooz said she heard the explosion while she was some distance away at her workplace.

"My car is actually underneath the building where the explosion happened," she said. "We're not really sure what's going on right now. I think the most important thing is that everyone is safe and everything is OK."

A gas line was shut off and secured, according to authorities. Police initially said the explosion may have been caused by a natural gas leak, but Los Angeles Fire Department officials distanced themselves from that statement, adding that the cause remained under investigation.

A person was evaluated for injuries at the scene and appeared to be a bystander who wasn't wearing proper footwear. He suffered small cuts because of the glass on the ground, according to firefighter-paramedics.

A gas reading and search were conducted on the residential floors to make sure no one would be in a hazardous environment.

The structural integrity of the building was also being examined by fire officials.

Highland Avenue was closed overnight between Franklin Avenue as Hollywood Boulevard, as well as side streets. Those streets were reopened early Thursday morning as the investigation and cleanup continued at the scene.