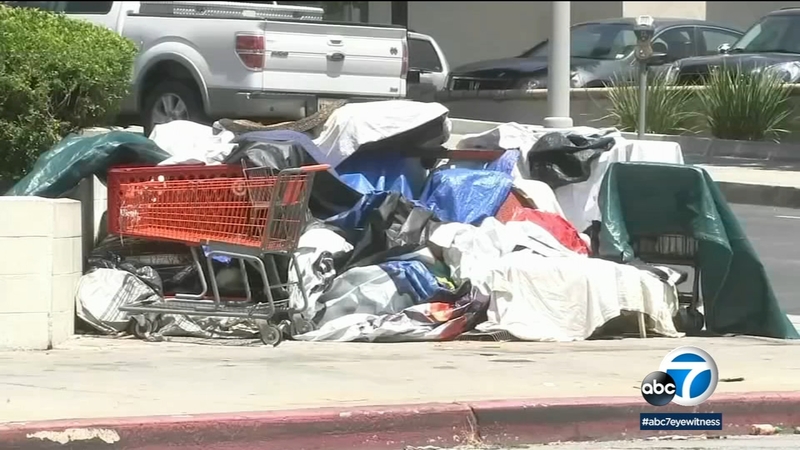 HOLLYWOOD, LOS ANGELES (KABC) -- Residents in one Hollywood neighborhood are concerned over their safety due to a nearby homeless encampment they say has increased crime in the area.

"I look at my car every single morning to see if it's been broken into today," said Sally C., who lives near the encampment.

To many, it may look like another homeless encampment in the city of Los Angeles. But to those who live in the Hollywood neighborhood that surrounds the tents near Sunset Boulevard and Martel Avenue, the encampment has rocked their sense of security for 17 months.

"I actually had my sister in-law come to visit for the first time and she parked across the street in broad daylight and within 30 seconds, someone from the homeless encampment was down swinging a club at her. The violence is escalating and we keep asking the City Council, what is it going to take? Do we need to wait till someone's murdered?"

The encampment is located at 7323 Sunset Blvd. and surrounds an AT&T building. It's located in L.A. City Councilwoman Nithya Raman's district. Raman toured the encampment one year ago, joined by residents, including Terry S.

"She promised. She said that she would be adamantly enforcing ADA compliance. That she's looking into setting up a safe camping location for the campers. Never happened," Terry S. said.

"In August, 41.18, an ordinance, passed and we were very hopeful because finally we thought that they would have some tools at their disposal," Lawrence S. said. "But the city councilwoman is only enforcing a part of that ordinance, which is the Care Plus Cleanup program. However, she's only doing it when she feels like enforcing it, which is three times in 17 months."

The encampment was cleaned on Thursday, but residents told Eyewitness News every time the encampment is cleaned, the unhoused return in the next 24 to 48 hours, which is what happened Friday. Residents say allowing the tents to return isn't humane.

"It used to be a wonderful place, and now it's a garbage heap. I mean, I think that the homeless look at the cleanup as though it's their personal maid service," Sally C. said.

"This encampment is a priority for our office, and our Homelessness Team has been consistently bringing services and working with the individuals living at this location. LAHSA outreach teams most recently identified seven people living here and together we worked to move three of them into shelter just yesterday as part of our Encampment-to-Home project, which has already moved 43 people in Hollywood indoors. Additionally, a cleanup took place at this location yesterday and we are working to move the remaining individuals into shelter as soon as beds become available. We are in continued communication with the residents in the neighborhood regarding the status of our progress as we move forward."