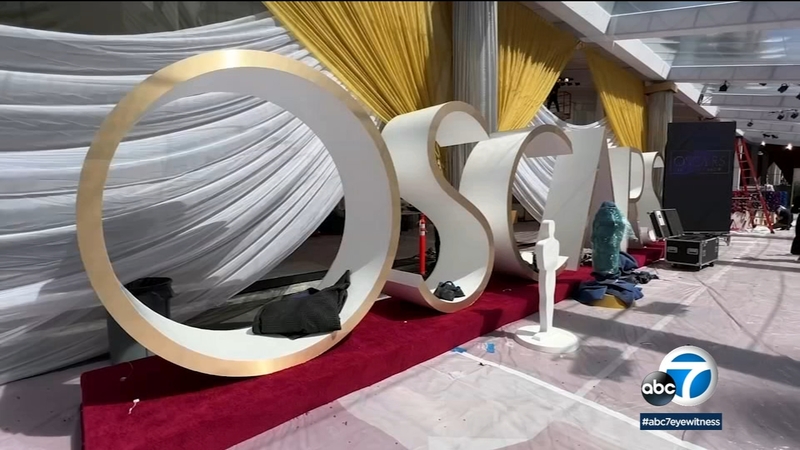 HOLLYWOOD, LOS ANGELES (KABC) -- Hollywood is "back in business." It's a round-the-clock effort as final preparations for the 94th Oscars ceremony are well underway, with finishing touches being put on everything inside and outside of the Dolby Theatre.

Drills, saws and lifts, their noise is the soundtrack of Oscar preparations.

The red carpet is not exactly red yet, and yard after yard of plastic protects the coveted Walk of Fame as construction crews frantically build the sets, and television crews continue setting up the gear that will send their coverage all around the globe.

Coverage in places like Brazil, Germany, Australia and France, where the Oscars show won't begin until 2 a.m.

"Believe it or not, the people stay awake to watch the Oscars," said Didier Allouch from Canal+ France.

Allouch is covering the Oscars for the French network, and says the big show is not a huge ratings magnet at that hour, but it's still a big enough draw to keep roughly half a million French viewers up through the night.

Of course, a trip to Los Angeles to cover the Oscars is a coveted assignment, especially if you're flying in from Britain.

"The sun's out," said Katie Spencer from Sky News UK. "We're used to being in the UK and it's not like this obviously, so we're enjoying being back in Hollywood."

Spencer has been covering the Oscars for the past seven years for Sky News UK, and even though getting on the red carpet means jumping through a series of COVID-19 testing hoops, she says the atmosphere finally seems to be returning to pre-pandemic Oscars -- just with fewer media.

"It does feel slightly more emptier here," Spencer added. "I think we probably have less crews that have been accredited to cover this, which is nice though really, because we all are a bit paranoid after COVID. We don't want to be fighting to get those interviews anymore."

The 94th Academy Awards will be held on Sunday, March 27, 2022 at the Dolby Theatre in Hollywood.