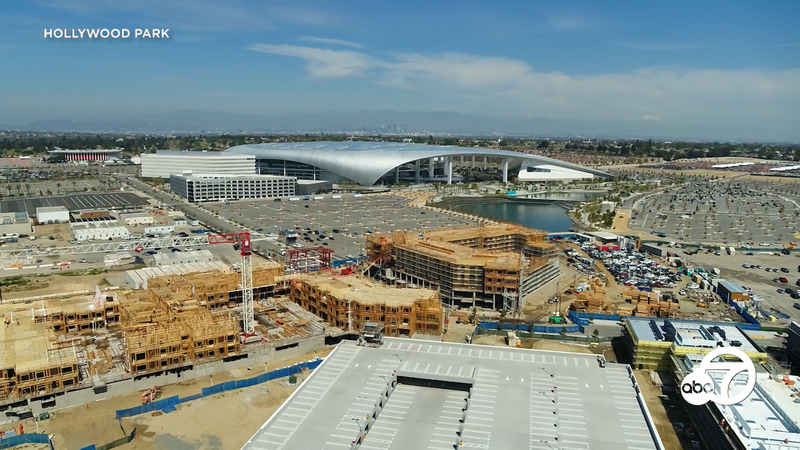 The development also has a 6,000-seat performance venue, recently named YouTube theater, and starting this summer will be the new West Coast headquarters for the NFL.

"We're incredibly excited to continue developing Stan Kronke's vision for not only the global sports entertainment destination with SoFi Stadium and YouTube theater, but also some incredible other components of the project," said Jason Gannon, managing director of SoFi Stadium and Hollywood Park.

Still under construction is the nearly 900 thousand square foot retail district and the 300-room hotel and the 2,500 new residences. Officials said it will essentially be a city within a city.

"Not about just special events, but it will be about being here for the people that live blocks away and miles away from us 365 days a year," said Chris Meany, developing manager of Wilson Meany.

The retail space at Hollywood Park is going to offer the community restaurants, community spaces and entertainment, like the developing Cinépolis theater, but officials said they also want to make sure they keep the Inglewood feel which is why they're including local Inglewood vendors as well.

"We're not a big company with a lot of stores. We're a family run business," said Christian Martin, owner of Antojitos Martin in Inglewood. "That always has a different type of energy and I think putting that in a project alongside obviously with some of these other big brands that will be there, I think is going to give it a really good mix."

"Our vision's certainly having international appeal with tenants like Cinépolis who have incredible theaters throughout the world, but also having a significant local component to our retail," said Gannon.

Residences are scheduled to be completed a few months after the 2022 Super Bowl which will take place at SoFi Stadium.