The peaceful demonstrations were held on the day after Floyd was eulogized at a memorial service in Minneapolis.
KABC
By Carlos Granda and Jessica De Nova 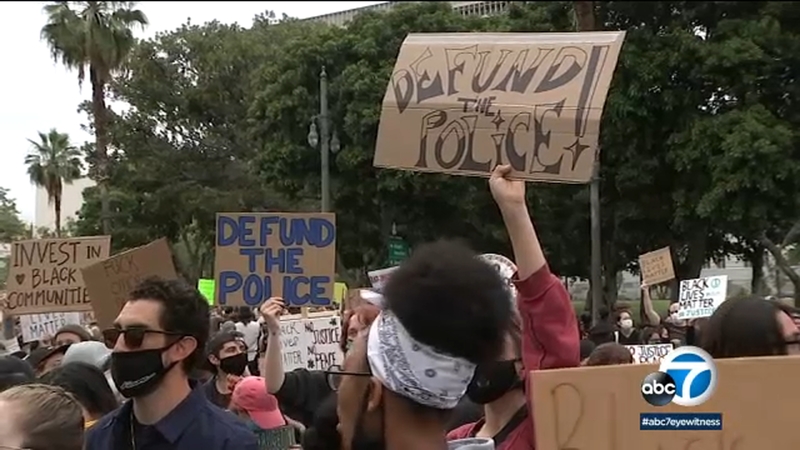 LOS ANGELES (KABC) -- Multiple protests over the death of George Floyd once again took place across Los Angeles and the wider Southern California region on Friday as demonstrators throughout the U.S. continue to demand justice in the Minneapolis case.

As with every other day so far this weekend, Hollywood was one of the many places where demonstrators gathered. A few hundred showed up outside the Laugh Factory on Sunset Boulevard to demand justice for George Floyd as well as Brianna Taylor on what would've been her 27th birthday.

The protest remained peaceful, even as the group marched down the street and back up again. At one point, they briefly blocked off traffic in both directions as police officers supervised nearby. The group slowly began to disperse without incident.
EMBED More News Videos

Multiple protests over the death of George Floyd once again took place across Los Angeles and the wider Southern California region on Friday.

In Downtown Los Angeles, thousands of people gathered and marched in the streets. Many people knelt at City Hall.

"We all hope for this antidote for this pandemic, but more importantly, as an American, I hope for an antidote for racism, for social injustice, for the inequalities," Moore said.

Over in Westminster, protesters marched from a local park to City Hall, where they sat on the ground holding signs in front of dozens police officers suited in riot gear.

In Westminster Friday, protesters marched from a local park to City Hall, where they sat on the ground holding signs in front of dozens police officers suited in riot gear.

Chants of "Take a knee" and "Quit your job" were heard sporadically as some demonstrators directly addressed officers to share their experience with law enforcement. Some said they faced police brutality at the hands of some of the officers who were present present.

One protester who grew up in Orange County said she has experienced racial profiling in surrounding cities. But, she said, she can also understand that many of them are "just as disgusted" with the racial inequities across the country and that they're just like her when they take off their uniform.

Still, she said, communities and law enforcement agencies need to work together.
"We've had enough. We need you guys to join with us, whatever that looks like. We need you to join the community in making sure that what happened to George Floyd never happens again," she said.

As more protesters peacefully marched through downtown Los Angeles, LAPD Chief Michel Moore joined interfaith community members in front of the department's headquarters for a community vigil and touched upon Floyd's in-custody death, which he said "tore at the very heart of what policing stands for, tore at the very essence of our very duty to protect, to serve, to treat each individual to treat them as just that."

In Minneapolis, where Floyd died in police custody, the city agreed to ban police chokeholds and require officers to intervene any time they see unauthorized force by another officer. The changes are part of a stipulation between the city and state officials who launched a civil rights investigation into Floyd's death. The City Council was expected to approve the agreement, which will be enforceable in court, later Friday.

Earlier in the day, community members placed thousands of roses the sidewalk outside the Hall of Justice in DTLA, in what organizers described as a tribute to victims of the Los Angeles County jail system.

Community members placed thousands of roses on the sidewalk outside the Hall of Justice in downtown Los Angeles, in what organizers described as a tribute to victims of the Los Angeles County jail system.

By early afternoon, demonstrations resumed for an 11th day around the country with continued momentum as the mood of the protests largely shifted from explosive anger to more peaceful calls for change. Despite the change in tone, the country's most significant demonstrations in a half-century - rivaling those during the civil rights and Vietnam War eras - showed no signs of dissipating. Formal and impromptu memorials to Floyd stretched from Minneapolis to North Carolina, where family were gathering Saturday to mourn him, and beyond.