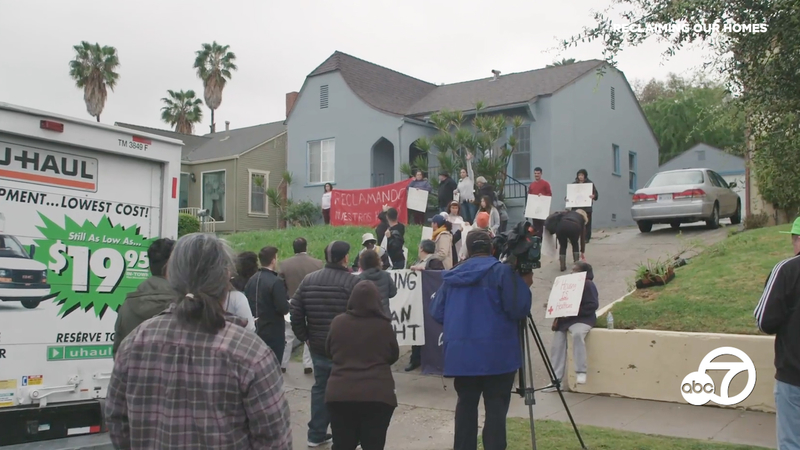 EL SERENO, LOS ANGELES (KABC) -- El Sereno community leaders and Caltrans have partnered with the Housing Authority of the City of Los Angeles to help a group of homeless activists in the area.

The group known as Reclaiming Our Homes started illegally occupying the Caltrans-owned homes in March.

Now, thanks to a new transitional housing program, the activists can legally occupy some of the homes.

"I'm extremely grateful for the community and for this push that was very much needed," said Martha Escudero, a single mother who is a part of the group and now benefiting from the program. "Especially during this pandemic, and being able to stay safe."

Caltrans purchased the homes to demolish for the expansion of the 710 freeway, but that stalled in 2018 after decades of controversy.

The Metro Board of Directors voted on Thursday to pull its support for the proposed 710 Freeway tunnel extension project.

The housing authority launched the program in late-October and will be using about 22 of the vacant state-owned homes to help people in need, starting with the 13 families who are a part of the activist group.

"Using those really as an emergency response to both the COVID crisis, as well as our statewide local housing crisis," said Jenny Scanlin, chief development officer at the Housing Authority for the City of Los Angeles.

The beneficiaries will be asked to pay about 30% of their income each month to use the home, but it is voluntary.

Officials said they are pushing to turn many of the state-owned vacant homes from transitional to permanent housing.

For now, those who are a part of this program could be allowed to stay in the home for up to two years.

"The fight is not over. Because we would like more permanent housing, we've developed community here, and we think that's important," said Escudero. "Also, in this neighborhood, we would like to prevent gentrification, and we want the people from the community to be able to stay here."