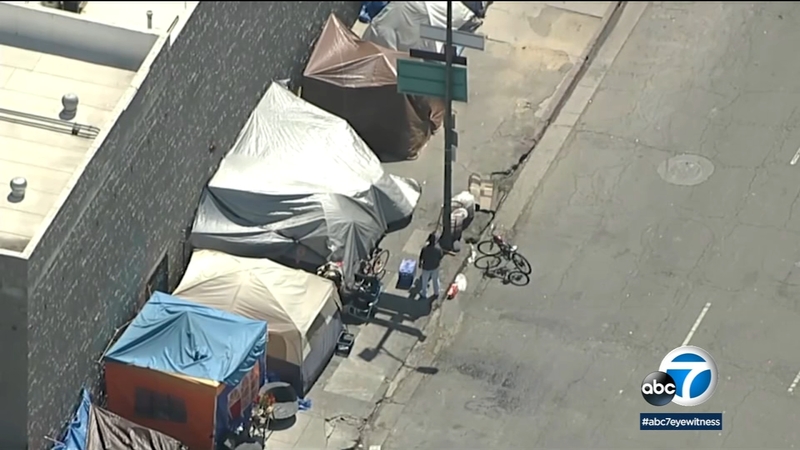 DOWNTOWN LOS ANGELES (KABC) -- Amid growing concern about the spread of coronavirus among vulnerable populations, health officials on Tuesday provided an update on an outbreak the the Union Rescue Mission in the skid row area of downtown Los Angeles.

The homeless shelter's first COVID-19 case was reported on March 28, and since then the number of cases at the location has grown to 43, said Dr. Barbara Ferrer, the county's director of public health.

Speaking at a daily briefing, Ferrer said the new data was received after more than 200 tests were administered at the Union Rescue Mission within the past week.

Los Angeles will provide COVID-19 testing and additional resources to Skid Row and other encampments to protect the homeless population from the virus.

The 43 cases include staff and the homeless, Ferrer said, adding that they were among the 178 people whose test results were confirmed.

The public health director said 16 of the patients were symptomatic, while 27 were asymptomatic. All of them will be isolated, she said, and shelter officials agreed quarantine everyone at the facility.

The Union Rescue Mission will not admit new guests "while we try to control the outbreak," Ferrer said.

The Los Angeles Fire Department set up a pop-up testing station near the shelter, whose capacity is being "decompressed" to allow for physical distancing inside. During the last two weeks, 184 people who were staying at the facility were moved to hotels and motels, Ferrer said.

Staff at the Union Rescue Mission "have also enhanced their daily screening and their deep-cleaning practices," she said.