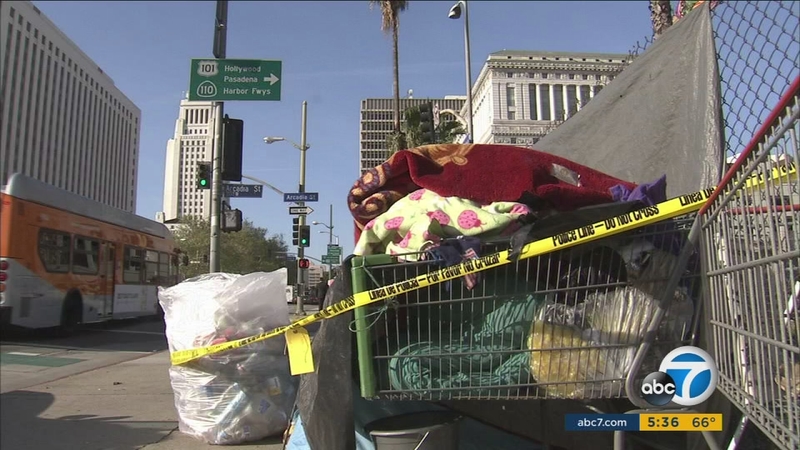 LAPD must give transients 24-hour notice before seizing property

LOS ANGELES (KABC) -- The streets of Skid Row are home for some who have tents and carts on the sidewalks, and now the city of Los Angeles can no longer take homeless people's property.

"It just reaffirms what the city of Los Angeles should know, that homeless people, houseless people do have constitutional protections," said Pete White of the Los Angeles Community Action Network.

A federal judge issued an injunction that stops the city from taking property without giving transients at least 24-hour notice and property that's confiscated has to be stored and accessible, but some doubt that can be done.

"There's no way to keep track of all these people's stuff. There's no way, no way," according to Rodney, a homeless man who has been living on the street right across from the LAPD's Central Station. "Your stuff is all gone and you're right back where you started from, nothing, and like your ID, your money, your jewelry and all your valuables are gone."

The city is working on a new ordinance that would allow homeless people to keep a limited amount of property, but an earlier version of this ordinance was already struck down by the U.S. Circuit Court of Appeals.

"We don't have any other alternative but to put our stuff out on the streets," transient John Johnson said.

The LAPD did not respond to Eyewitness News' request for comment. The L.A. City Attorney's Office released the following statement: "We continue to evaluate the court's order and we will work with LAPD and Public Works to ensure they comply with the order."

Homeless advocates say this should push the city to make some reforms and somehow get more housing to deal with the homeless issue.

"You have to have a real plan to end homelessness. Homelessness can no longer be ended by attempting to sweep people out of sight and out of mind," White said.