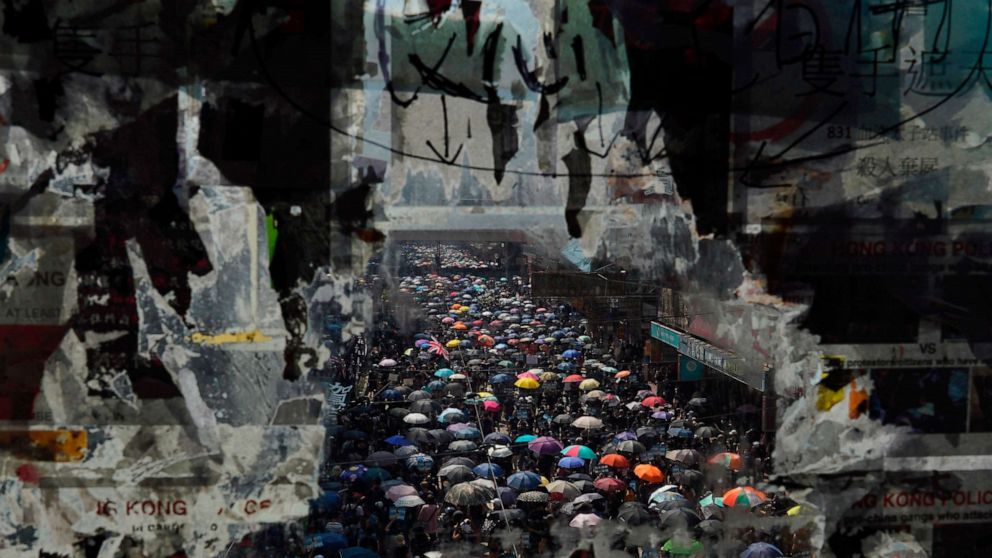 HONG KONG -- An 18-year-old anti-government protester was shot by a police officer in Hong Kong on Tuesday afternoon during a day of violent clashes between police and thousands of demonstrators who took to the streets on China's National Day.

Hong Kong police have been known to fire live rounds into the air as warnings since the protest movement began in June, but this was the first time a demonstrator was shot by police.

While Tuesday's demonstrations were largely peaceful, there were several violent clashes between protesters and police. Officers used tear gas, pepper spray, water cannons and rubber bullets to disperse the huge crowds, while some protesters hurled back tear gas canisters, petrol bombs and bricks.

A video of the shooting incident appears to show a protester swinging at a police officer with a metal rod, and the officer firing a weapon at close range.

"The officer was under attack, his life was threatened," Lo said. "He made a very quick decision and shot the assailant. I believe it was his best judgment at the time."

Lo said that police had fired warning shots in four other areas, and that a total of 180 protesters were arrested.

Earlier in the day, the Hong Kong Police Force tweeted out photos of injured officers, and Lo said 25 police officers had been wounded in clashes with protesters.

The protests kicked off in early June when hundreds of thousands of mostly young people marched against a proposed extradition bill that would have allowed suspected criminals in Hong Kong, a semi-autonomous Chinese territory, to be sent to mainland China for trial. Hong Kong's embattled leader, Carrie Lam, has since withdrawn the bill, but widespread unrest has continued as demonstrators broaden their demands to include a call for direct elections for the city's leaders, amnesty for protesters and an independent investigation into alleged police brutality.

A statement from the Hong Kong government's public relations office urged all members of the public to stay in safe places and avoid going outside because the "rioters have set fires and committed mass property damage, injuring many people."

Meanwhile in Beijing, the Chinese government put on a massive and colorful military parade to celebrate the 70th anniversary of the founding of communist China. Some 15,000 soldiers marched across Tiananmen Square, in the heart of the capital, where rows of tanks and ballistic missiles were on display, while fighter jets flew overhead.

During his nationally televised speech, Chinese President Xi Jinping called for stability in Hong Kong and the "complete unification of the country."