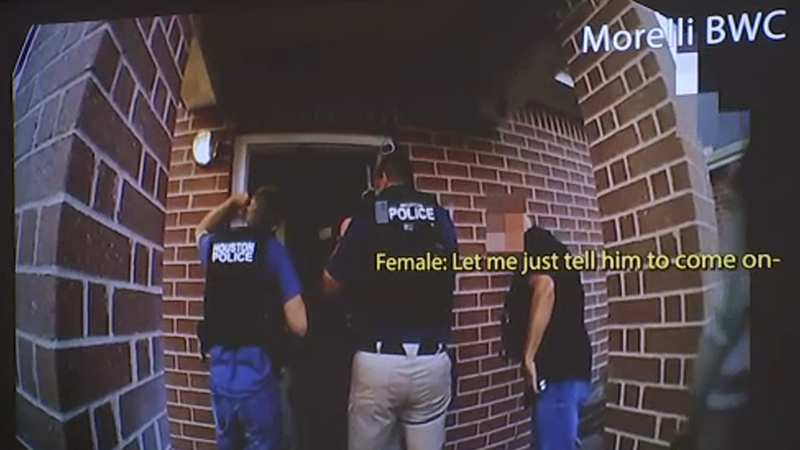 HOUSTON, Texas -- More than three weeks after a veteran police officer and a wanted felon were shot and killed, Houston police have released body camera footage of the violent incident.

On the morning of Sept. 20, Houston Police Department Senior Officer William "Bill" Jeffrey and Sgt. Michael Vance were part of a team of officers who attempted to execute a narcotics arrest warrant for Deon Ledet at a Harris County apartment complex. Jeffrey was killed and Vance was critically injured when Ledet opened fire through the apartment door.

Camera footage from multiple police officers that day showed their interaction with a woman inside the apartment before gunfire erupted. The videos were made public Tuesday by Houston police.

The video may be extremely disturbing for some. For that reason, ABC7's sister station KTRK-TV in Houston chose not to share the entire video that shows the moment when Jeffrey and Vance were hit.

At the beginning of one of the videos, an officer can be heard talking to a woman who answered the door. Moments pass before the officer calls out for Ledet when rapid gunfire began.

Ledet can also be heard in the video yelling in between the bursts of gunfire.

On Tuesday, authorities pointed to a device on Ledet's gun that allowed him to fire so rapidly and called for reform to prevent more of them from hitting the streets.

"If you pay particular attention to the body worn camera of the two officers, the sergeant and Officer Jeffrey at the door, you get the best indication that that weapon was firing in a fully automatic mode," said ATF Special Agent in Charge Fred Milanowski.

Milanowski said his agency has encountered the devices before in Houston. About 100 of the so-called auto switches have been confiscated by ATF agents in Houston so far this year, and seven investigations across the area involved 11 handguns that had the device attached.

The auto switches work by applying force to a gun's trigger bar to allow it to fire multiple rounds while a trigger is pressed. Guns can fire 30 rounds in just 2.6 seconds, Milanowski said.

The devices themselves are illegal and are considered unregistered machine guns.

Ledet, 30, was also shot during the ordeal and died at the scene. No one else in the apartment was injured.

The suspect in the fatal shooting of Houston Police Officer William “Bill” Jeffrey and wounding of Sgt. Vance was armed with a firearm including an auto switch. @HCSOTexas @houstonpolice @ATFHou @USAO_SDTX and @HarrisCountyDAO are working together to raise awareness about the

illegal use of auto switches. We are a unified public safety team, regardless of the agency, organization, or jurisdiction. #HouNews #lesm