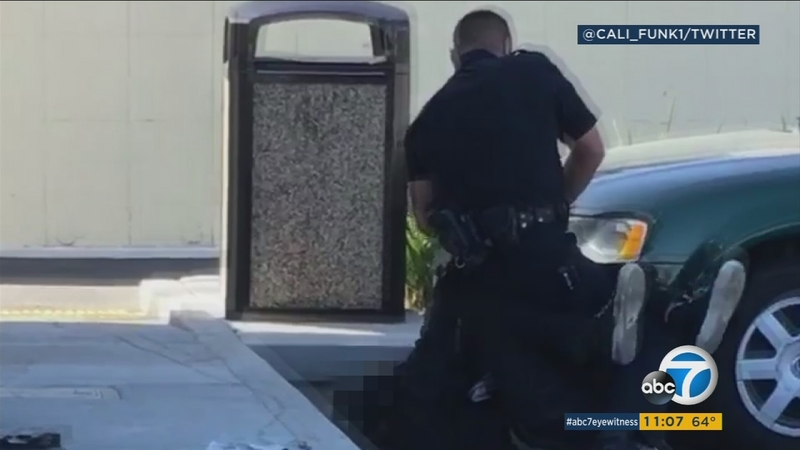 HUNTINGTON BEACH, Calif. (KABC) -- A suspect died following an officer-involved shooting outside of a 7-Eleven store in Huntington Beach, police say, and the incident was caught on camera.

The shooting happened in the 6000 block of Edinger Avenue at about 9:30 a.m. Friday. Authorities said the incident started with an altercation with the suspect.

The officer fired seven shots and struck the suspect.

A witness captures an officer-involved shooting in Huntington Beach on Friday.

The suspect was transported to a nearby hospital, where he later died, Huntington Beach police confirmed. No officers were injured.

Marina High School was temporarily on lockdown nearby as a precaution, police said. The lockdown was lifted at about 11:15 a.m.

Police said no suspects were outstanding. Authorities said they were not releasing details of what led up to the confrontation or how the officer came in contact with the suspect.

"The suspect was resisting and clearly the officer was defending himself and trying to take the suspect into custody," he said.

He goes on to say the officer tried using a Taser at first, but when that didn't work, the suspect began attacking him.

"Just because the person didn't have a weapon, if he's struggling with that officer and actively assaulting that officer and trying to take his weapon away, trying to take equipment away from his belt that can harm him - he has every right and every responsibility and we train them to defend themselves with lethal force," Handy said.

But not everyone agreed with Handy.

"These officers are getting away with murder. If we were a civilian and we did this, it would be murder," one woman said.

As part of police protocol, the investigation is now being handled by the Orange County Sheriff's Office.

Handy said until that investigation is over people should realize the witness videos are only a small portion of what happened.