COVID pandemic: OC restaurant gets backlash for requiring proof customers are not vaccinated 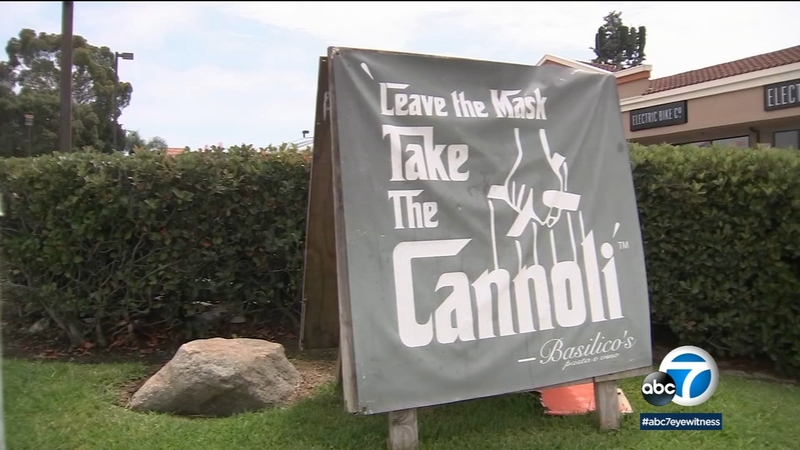 OC restaurant requires customers to prove they are not vaccinated

HUNTINGTON BEACH, Calif. (KABC) -- The owner of Basilico's Pasta e Vino spoke out against a backlash on Monday, after posting flyers outside his business and on social media requiring proof that customers are not vaccinated.

The flyers read: "Notice: Proof of being unvaccinated required. We have zero tolerance for treasonous, anti-American stupidity. Thank you for pondering."

Tanya Scheer, who cuts hair at a nearby barber shop, said she was aware of the owner's anti-mask, anti-vaccination stance.

They've been very open about it throughout the pandemic on their storefront and online.

Scheer, who is vaccinated, said she didn't feel unwelcomed by it.

"No, because you got other places that want you vaccinated to come in. No different, right? So no," Scheer said.

California announced all state and healthcare employees will be required to show proof of vaccination or be subjected to weekly testing.

Many people are bothered, according to reviews on Yelp.

Dozens left low ratings for Basilico's with comments like one that read: "What a slap in the face to all those who died from COVID-19."

The increased public attention led to Yelp temporarily disabling posting on the page.

The owner of the business responded to the backlash in a post on Facebook, writing, in part: "Here come the haters, and with it, the harassing non-stop phone calls, threats and hundreds of one star reviews. And guess what? We at Basilico's Pasta e Vino wear it as a badge of honor."

The post added: "We feel blessed to go into battle against all of you in defense of American liberty and freedom, so bring it on!"

If California was still using the tier system, when taking a look at the seven-day average case rate per 100,000 for the vaccinated OC community, the county would be in the orange tier.