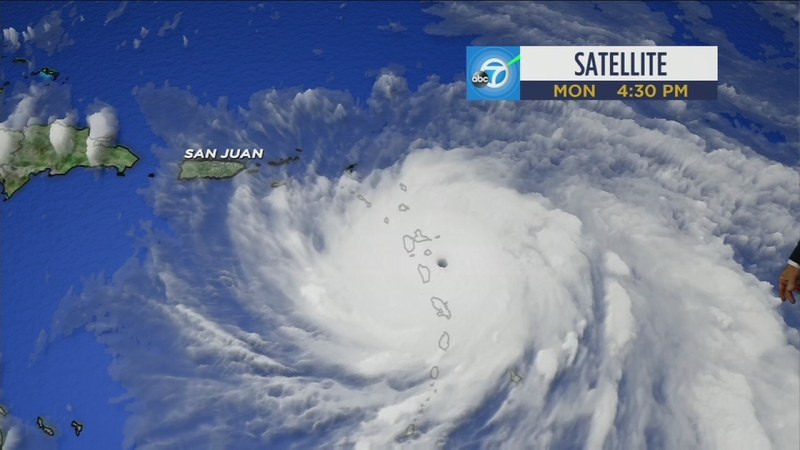 SAN JUAN, Puerto Rico -- Hurricane Maria intensified into a dangerous Category 5 storm and pounded the small island of Dominica as it surged into the eastern Caribbean on Monday night, and forecasters warned it might become even stronger.

The storm was following a path that could take it on Tuesday near many of the islands recently devastated by Hurricane Irma and then head toward a possible direct strike on Puerto Rico on Wednesday.

A series of Facebook posts by Dominica Prime Minister Roosevelt Skerrit captured the fury of the storm as it made landfall on the mountainous island.

"The winds are merciless! We shall survive by the grace of God," Skerrit wrote at the start of a series of increasingly harrowing posts.

A few minutes later, he messaged he could hear the sound of galvanized steel roofs tearing off houses on the small rugged island.

He then wrote that he thought his home had been damaged. And three words: "Rough! Rough! Rough!"

A half hour later, he said: "My roof is gone. I am at the complete mercy of the hurricane. House is flooding." Seven minutes later he posted that he had been rescued.

It was the first official word from Dominica after the eye wall moved ashore.

Hurricane Maria, shown in a Sunday night satellite image from NASA, has strengthened to a Category 5 as it bears down on islands in the Caribbean.

Dominica authorities had closed schools and government offices and urged people to move from dangerous areas to shelters.

"We should treat the approaching hurricane very, very seriously," the prime minister warned as the storm approached. "This much water in Dominica is dangerous."

In August 2015, Tropical Storm Erika unleashed flooding and landslides that killed 31 people and destroyed more than 370 homes on the small, mountainous island.

Officials on nearby Guadeloupe said the French island would experience extremely heavy flooding and warned that many communities could be submerged overnight.

In Martinique, authorities ordered people to remain indoors and said they should prepare for cuts to power and water. Schools and non-essential public services were closed.

With Puerto Rico appearing destined for a hit, officials in the U.S. territory warned residents of wooden or otherwise flimsy homes to find safe shelter.

"You have to evacuate. Otherwise you're going to die," said Hector Pesquera, Puerto Rico's public safety commissioner. "I don't know how to make this any clearer."

"Maria is developing the dreaded pinhole eye," the center warned.

That's a sign of an extremely strong hurricane likely to get even mightier, said University of Miami hurricane researcher Brian McNoldy. Just like when a spinning ice skater brings in their arms and rotates faster, a smaller, tighter eye shows the same physics, he said.

Maria's eye shrank to a narrow 10 miles (16 kilometers) across.

"You just don't see those in weaker hurricanes," McNoldy said.

Forecasters said storm surge could raise water levels by 6 to 9 feet (1.8 to 2.7 meters) near Maria's center. The storm was predicted to bring 10 to 15 inches (25 to 38 centimeters) of rain for some islands, with the possibility of higher amounts in isolated spots.

"We are going to have a very, very long night," Mapp said as he urged people in the territory to finish any preparations.

St. Thomas and St. John are still recovering from a direct hit by Hurricane Irma, which did extensive damage and caused four deaths on the two islands.

Officials and islanders were also bracing in Puerto Rico, which did not take a direct hit from Irma but still saw blackouts across much of the territory. Nearly 70,000 people remain without power, and Gov. Ricardo Rossello warned of an island-wide outage.

"This is going to be a catastrophic event," he said.

Forecasters said the storm would dump up to 18 inches (46 centimeters) of rain across Puerto Rico and whip the island with heavy winds for 12 to 24 hours.

Officials said the Federal Emergency Management Agency was ready to bring drinking water and help restore power in Puerto Rico after the storm.

Traffic was heavy Monday as people rushed to buy last-minute items. Among them was 70-year-old retiree Rafael Rivera, who clutched a small bag of dog treats for his dog and six puppies at home.

"This storm is coming with some bad intentions," he said at a San Juan store where some shoppers grumbled about empty shelves.

Rossello said Puerto Rico had prepared 500 shelters capable of taking in up to 133,000 people in a worst-case scenario. Nearly 200 people are still in shelters due to Hurricane Irma. Classes were cancelled and government employees were to work only a half-day.

Farther north, long-lived Hurricane Jose continued to head northward well away from the U.S. East Coast but causing dangerous surf and rip currents. It was not expected to make landfall, but a tropical storm warning was in effect for coastal areas in Rhode Island and Massachusetts. Tropical storm watches were posted for parts of New York's Long Island and Connecticut.

Jose was centered about 230 miles (370 kilometers) east of Cape Hatteras, North Carolina, and was stationary. It had maximum sustained winds of 75 mph (120 kph).