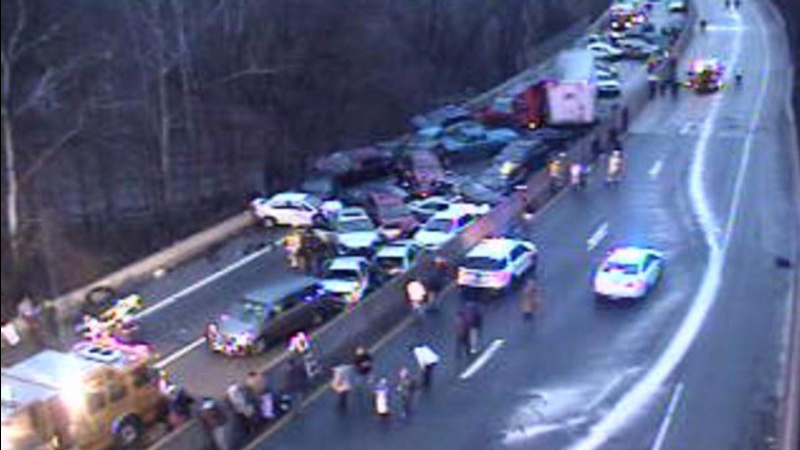 PHILADELPHIA -- At least three people were dead after multi-vehicle accidents on the Schuylkill Expressway and the Blue Route in Philadelphia due to icy roads.

One person was pronounced dead after the major pile-up involving more than two dozen vehicles on the Schuylkill Expressway.

State Police confirm the fatality to Eyewitness News, but have not released further details.

Authorities say there were so many injuries, State Troopers needed to bring in a bus to transport the victims to area hospitals.

Traffic is blocked in both directions between Gulf Mills and the Blue Route.

It is one of a number of multi-vehicle accidents due to icy roads Sunday morning.

Around the same time, a multi-vehicle crash occurred on the Blue Route in West Conshohocken.

State Police say two people were killed in this crash.

The accident also resulted in the backup of traffic in the area.

The Walt Whitman Bridge, Burlington-Bristol Bridge, and Betsy Ross Bridge are shut down due to ice.

Two eastbound lanes of the Ben Franklin Bridge have reopened, all lanes were shut down for hours.

The Tacony Palmyra Bridge and the Commodore Barry Bridge were also shut down for a period of time but have reopened.


A multi-vehicle accident has also been reported on I-676 westbound at I-76 West- Valley Forge.

Meanwhile on I-95 northbound, a multi-vehicle crash was reported between Columbus Boulevard and I-676. All lanes are closed.

In the Frankford section of Philadelphia, a fire department ladder truck slid on ice at Frankford Avenue and Margaret Street while responding to an accident.

The truck jackknifed around 8:00 a.m. No injuries were reported.

In Claymont, Delaware, a State Trooper received minor injuries after his patrol car was struck while investigating a crash.

The trooper was on location on I-495 over Naamans Road taking a report on an ice-related accident when his vehicle was struck.

The trooper was taken by ambulance to Christiana Hospital for non-life-threatening injuries.

While on location covering this incident, a third crash on the ramp for Naamans Road was caught on camera.

A freezing rain advisory is in effect in the area through 10:00 a.m. but temperatures are forecast to rise into the 40s later Sunday.

Philadelphia police are asking drivers to stay off the major roads this morning.

SEPTA and NJ Transit are also reporting some delays due to the icy conditions. For the latest information, visit SEPTA.org and NJTransit.com.

PATCO says it is running on or close to normal. PATCO is honoring NJ Transit bus tickets between Camden (Broadway Station/Water Rand) and Philadelphia at this time. For more information, visit, http://www.ridepatco.org/

Philadelphia International Airport says to check your flight status with your airline or call 1-800-PHL-GATE.