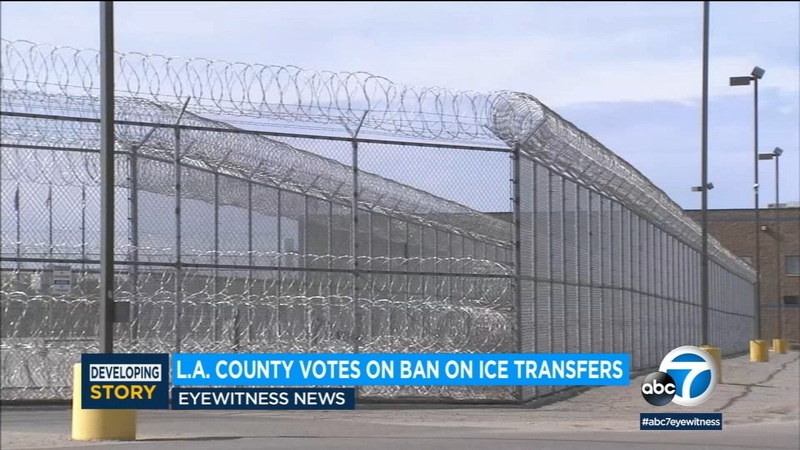 Supervisors Hilda Solis and Sheila Kuehl co-authored the motion asking their colleagues to prohibit the use of county resources of any kind in transferring people to the custody of U.S. Immigration and Customs Enforcement without a judicial warrant. The board's vote makes permanent a moratorium on cooperation established by Villanueva in April in response to the COVID-19 crisis.

"It is the right time to end this jail-to-deportation pipeline,'' Solis said. It is unsettling to hear of unsanitary conditions in detention facilities due to ICE's inability to keep detainees safe from COVID-19, and that many are dying after exposure to the virus while in ICE custody.

"We have also heard of horror stories due to problematic ICE detainer requests that call for the imprisonment of immigrants without due process or probable cause ...,'' she said. We have a moral and constitutional obligation to stop transferring people to ICE custody during this pandemic and long after it is over.''

A young man is fighting for his life at Children's Hospital of Los Angeles, possibly with just weeks to live due to cancer. His parents in Mexico have fought for the right to see him, even getting help from a U.S. senator.

Kuehl said it made sense to make the ban a matter of county policy that would outlive the pandemic and Villanueva's tenure.

"This motion ensures that ICE will have to present warrants, signed by a judge, if they intend to detain individuals being released from jail, and strengthens the sheriff's decision to institute a moratorium on ICE transfers without a judicial warrant,'' Kuehl said. It adds an additional level of scrutiny to the process. We want to limit any sheriff's cooperation with ICE to what is legally mandated, and this helps make our policy airtight.''

Though Villanueva made his April moratorium on cooperation permanent last month, without the board's action, it could only be enforced during his administration. Prior to the vote, the sheriff called the motion "a very good step forward.''

He also pointed out that the county would need to accommodate the department's need to cooperate with ICE on U visas for victims of crime who help law enforcement.

"This is truly historic: the nation's largest county, which set a terrible precedent by being among the first jurisdictions to embrace the federal government's devastating deportation programs, is now leading the way by ending ICE transfers altogether absent a judicial warrant,'' said Hector Villagra, executive director of the American Civil Liberties Union of Southern California. "It is a testament to the immigrant community's perseverance and tenacity in fighting, for a decade and a half, to protect its rights.''

A woman is captured on video confronting a landscaper and demanding to see his "papers" while he mows a lawn at a housing complex in Rancho Mirage.

"With Labor Day approaching, the historic action the Board of Supervisors is taking to end ICE transfers without a judicial warrant is not just advancing the rights of all immigrants: it's also protecting the rights of immigrant workers,'' said UNITE-HERE Local 11 Co-President Ada Briceno.

A U.S. Army veteran who was deported twice after serving his country said many fellow veterans mistakenly believed they had achieved citizenship through military services.

"After service, I struggled adjusting. I eventually found myself in prison,'' Hector Barajas told the board. "After I served about three years in prison, instead of returning home to my family, I was turned over to immigration. At the time, I was still a green card holder and not a U.S. citizen. I had not naturalized because I had no information about the process or help through the military or anywhere else. I spent a year in immigration detention without a lawyer, and I was deported.''
Report a correction or typo
Related topics:
societygarden groveorange countyadelantoarrestlawsuiticeimmigrationorange county sheriff's department
Copyright © 2022 KABC Television, LLC. All rights reserved.
TOP STORIES
Suspect charged with murder of Brianna Kupfer, LA County DA announces
3 Canadians shot, 1 fatally, at ​resort near Mexico's Playa del Carmen
Laundrie claimed responsibility for Petito's death in notebook: FBI
Kobe Bryant's widow discloses witness list for trial over crash photos
Boy, 14, dies after being shot in head in Pasadena; suspect arrested
Louie Anderson, Emmy-winning comedian, dies at 68
Conjoined twins separated after 10-hour surgery
Show More
Kamala Harris to discuss wildfire recovery efforts during SoCal visit
3 men accused of attacking father and son outside of Toluca Lake pub
High wind warning issued for parts of SoCal as strong winds move in
Lawsuit accuses Mater Dei athletics coach of raping student in 1980s
Proposal could make rooftop solar panels in CA more expensive
More TOP STORIES News