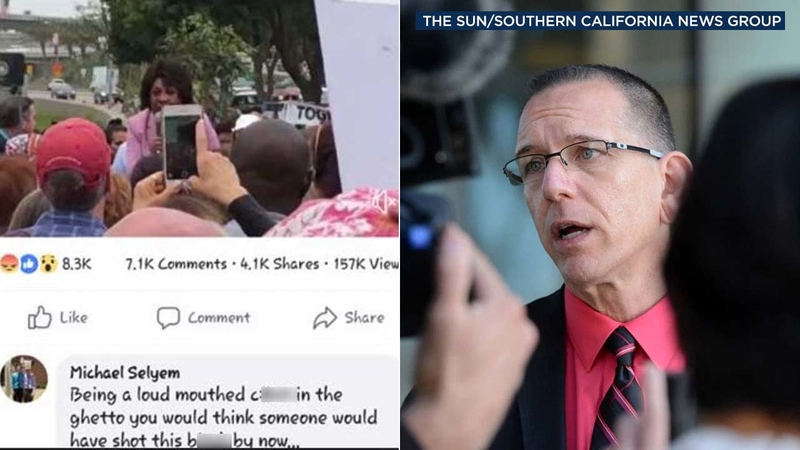 SAN BERNARDINO, Calif. (KABC) -- A San Bernardino County deputy district attorney is under investigation for a series of offensive social media posts, one of which targets Rep. Maxine Waters.

Michael Selyem has been placed on administrative leave pending the conclusion of a formal investigation, which could result in disciplinary action up to termination, said San Bernardino County District Attorney Mike Ramos at a Monday press conference.

"The strongest asset in the district attorney's office as prosecutors and staff that work in this office - is that of our ethics and integrity," Ramos said.

Selyem is accused of publishing several offensive posts on social media accounts that have now been deleted.

"On June 28, 2018 we received information regarding negative comments posted online by one of our prosecutors. At that time, we took immediate steps to initiate a personnel investigation," Ramos said. " The San Bernardino County D.A.'s office does not condone hate, discrimination or incitement of violence."

Ramos said he was offended by the posts, particularly about Selyem's comments about the officer-involved shooting.
EMBED More News Videos

"Because we handle those cases, as you know, on a daily basis. We are currently investigating officer-involved shootings, and to make any comments regarding, whether it's general comments or statements in what was stated, impacts the ability for us to ensure the integrity of this office and making sure the public knows that we are doing these cases and investigating these cases in an unbiased fashion," Ramos said.

Ramos said although he cannot speak about Selyem's mindset, he described the content of those social media posts as "very concerning."

Ramos added that Selyem's cases will be reassigned

As for past cases Selyem was involved in, Ramos said, "I would make that comment to the public, if there's anybody that feels that perhaps there was some bias or circumstances regarding his cases, we have a conviction review unit that we have in place. We will look at any cases. I have assigned my Assistant DA Gary Roth to overlook his cases and make sure justice was done."

Ramos emphasized that his office has received no prior indication of any type of bias regarding Selyem's cases.

"But that's not to say we won't review them, especially if there is a request to do so," Ramos said.