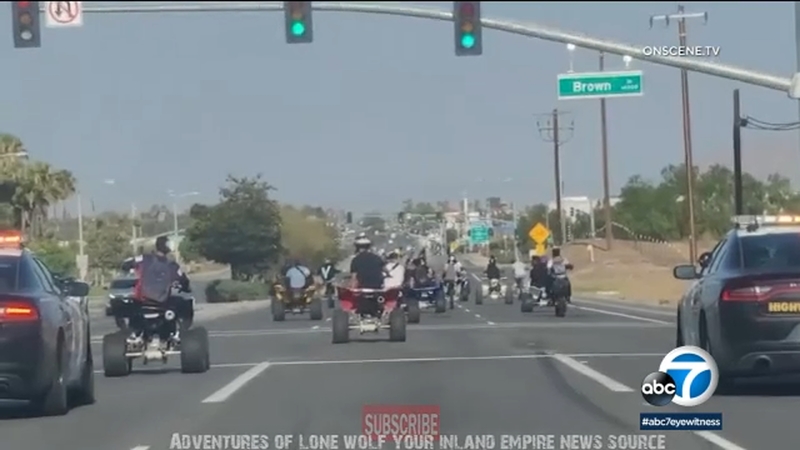 RIVERSIDE, Calif. (KABC) -- Police say illegal off-roading in the Santa Ana river bottom in Riverside is becoming a growing problem. Not only does it put users of the bike trail along the river in danger, but it can lead to serious injuries for the off-roaders themselves.

And it's not just a problem in the river bottom and on dirt roads, but on local streets and even freeways.

"They're not being safe," said Riverside Police Department Officer Ryan Railsback. "They're coming up onto the bike path where we have walkers, and we have joggers, and bicyclists."

ATV and dirt bike use in the Santa Ana river bottom is illegal. But police say that hasn't deterred them, and nearby residents say the problem is only getting worse.

"They'll ride up close to the house," said Chantel Runnels, who lives right across the street from the river bottom near Ryan Bonaminio Park in Riverside. "They'll stir up a lot of dust."

Runnel's biggest concern are all of the other people who use the Santa Ana river trail.

"You have kids, families, and cyclists. And these large motor vehicles that will show up unannounced," she said.

In response to the growing problem, police are increasing enforcement in the area. And they're adding additional barriers to many of the entry points in the form of large boulders and steel poles.

What was supposed to be a fun ride turned into a harrowing ordeal for an Idaho man who was pinned against a tree for three days following an ATV crash.