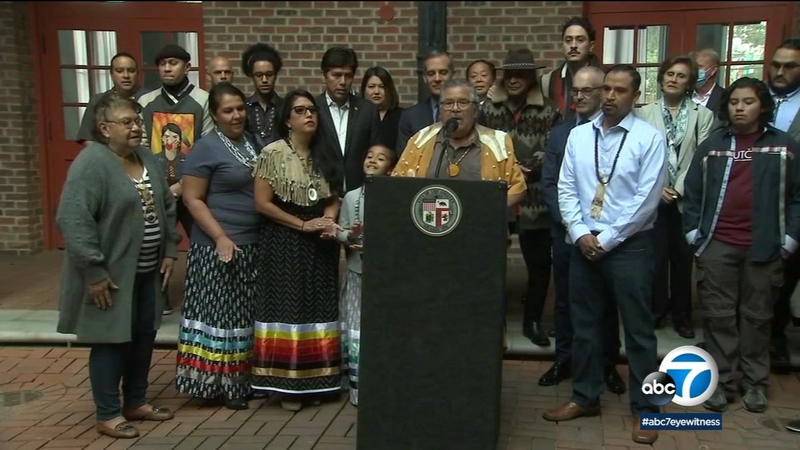 DOWNTOWN LOS ANGELES (KABC) -- As Southern California recognizes Indigenous Peoples' Day, the city of Los Angeles will rename a park in downtown as an effort to acknowledge the past mistakes done to Native Americans.

Father Serra Park will be called La Plaza Park until a new name is officially adopted. The park is located across the street from Union Station.

"This is not about tearing down or erecting statues. This is about telling the complicated truth of history," Mayor Eric Garcetti said Monday.

The statue of Father Serra was taken down in June 2020, as calls to acknowledge those held back by past decisions grew louder.

"Places like Serra Park, named after Junipero Serra who in this region led local subjugation and conversion efforts on behalf of the Catholic Church, are a powerful symbol of past wrongs," said Councilman Mitch O'Farrell. "This is an opportunity to set a more honest, restorative path for the future of our native youth."

The city has also launched a Cultural Easement initiative, taking a close look at what L.A. can do for the indigenous communities in the future.

Garcetti said the renaming of Father Serra Park is just a start, as the city plans to issue a formal apology, give Native Americans priority access to the park, and try to figure out what land they could give back and when.

Activists on Saturday toppled a statue of Junipero Serra, widely regarded as the founder of the California Missions, from its perch on Olvera Street in downtown Los Angeles.