Inglewood community members organize a march and rally to empower and educate the millennial and Gen Z population.
KABC
By Ashley Mackey 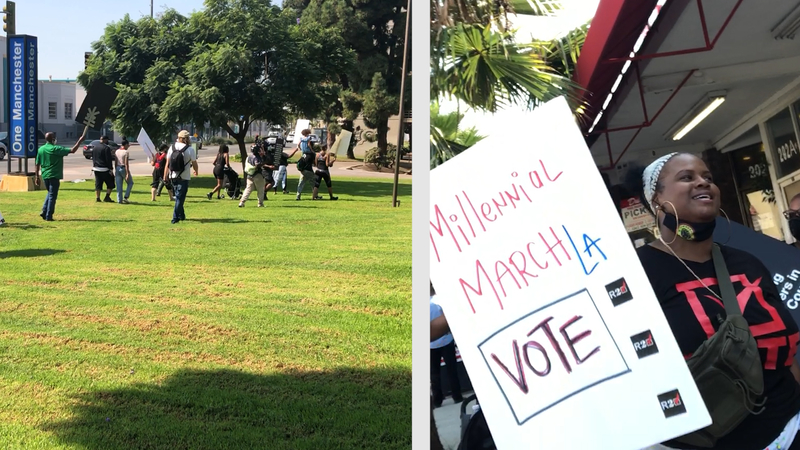 INGLEWOOD, Calif. (KABC) -- Inglewood community members organized a march and rally on Saturday, to empower locals, specifically the younger voters, to fill out their ballots this election.

Inglewood community members chanted "my voice is my vote" during their inaugural Millennial March LA: Voter Awareness Drive, an event to encourage millennials and Gen Z to fill out their ballots this election.

"The purpose of us is to gather the millennial voters because they seem to be maybe not necessarily the most undecided," Parchman said. "They're the ones that really have questions about what's going on and really wondering if their vote matters."

"As millennials or even Generation Z, we're looked at as the youth," said Inglewood resident Tanae Denean Eskridge said. "But it is our responsibility to, if it's not given to us, to take the baton and empower ourselves so that we can have something to pass on to the next generation."

The group walked about 2.5 miles to meet at the rally location in front of city hall. Not only was the event about empowering local residents to vote, but it was also about education.

Along with voter registration, music and live entertainment, they also had Shannon Lawrence, Chief Strategist of I Can Lead! to speak and educate the young people on some of the propositions that he feels most affect the community.

"Every election is important and even though the presidential election usually has the highest turnout, that's also not the only thing on the ballot," Lawrence said. "There are things that are going to impact us as people as community members, as parents, as workers that are going to impact us much more significantly and much more quickly than whoever's sitting in the White House."