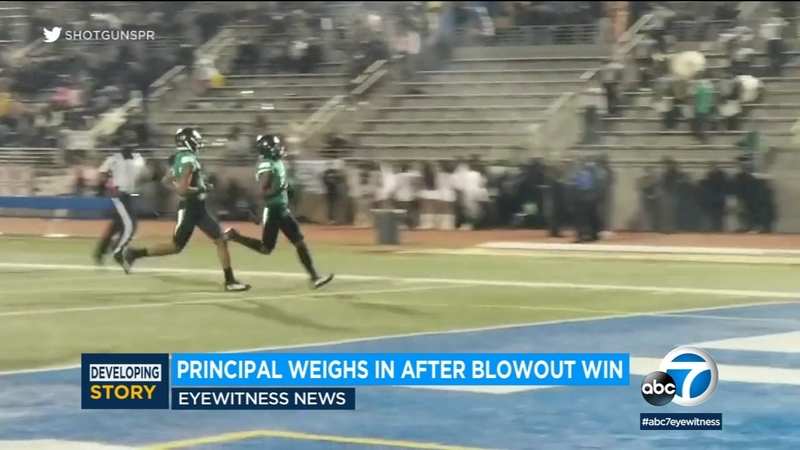 INGLEWOOD, Calif. (KABC) -- The principal of Inglewood High School is apologizing after her school's football team won a game 106-0, provoking criticism about sportsmanship.

"We did not conduct ourselves with sportsmanship and integrity and the final score was unacceptable," Tate wrote. "Coach James has also offered his apologies to the Morningside High School football program and the larger school community."

The other team's players and coaches "have worked hard and deserve our respect," she added.

The lopsided score included Inglewood opting for a two-point conversion when it was already leading 104-0.

The Inglewood Unified School District is reviewing the incident. Tate said the school will work hard to make sure a similar incident doesn't happen again in the future.

RELATED | Inglewood criticized after 106-0 win over Morningside in football game: 'It was a classless move'
EMBED More News Videos

The California Interscholastic Federation Southern Section has also condemned Inglewood's conduct, saying it "expects that all athletic contests are to be conducted under the strictest code of good sportsmanship. We expect coaches, players, officials, administrators and students to adhere to the Six Pillars of Character - Trustworthiness, Respect, Responsibility, Fairness, Caring and Citizenship. A score of 106-0 does not represent these ideals."