Flower vendor attacked in Inglewood speaks out after robbery and assault

A flower vendor randomly attacked in Inglewood is receiving support from the community.
KABC
By Ashley Mackey and Eric Resendiz 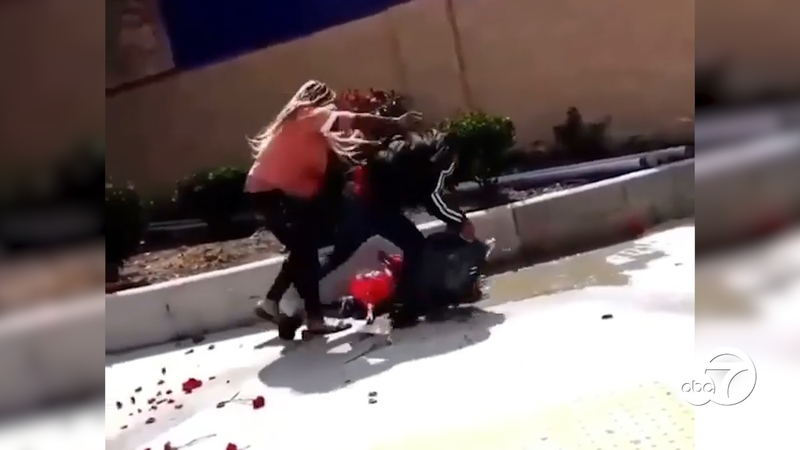 INGLEWOOD, Calif. (KABC) -- A street vendor selling flowers was attacked in Inglewood this week. It was caught on camera and the video prompted an outcry.

"I distanced myself then that person tried to follow me and started yelling at me in English," said Ernesto Francisco in Spanish.

27-year-old Ernesto Francisco was selling flowers in Inglewood in front of the Inglewood Park Cemetery when he was attacked and robbed. The assault was caught on camera and garnered a lot of attention on social media.

The Inglewood Police Department posted a picture on Facebook, and said they arrested the suspect depicted in the street vendor robbery video.

"I would say it's like an act of racism towards me, an act of discrimination towards me," Francisco said. "The person said obscene words when they started yelling at me."

Francisco said this was the first time he ever saw the woman who attacked him. He said she started to vandalize the cemetery there before she came after him.

"Fortunately, [another] courageous woman arrived and stayed there in front with her truck and everything," Francisco said.

Francisco said he's received a lot of community support since the incident.

"It is hard, they're out there making a living, especially on these tough times," said community activist Edin Enamorado. "So, if people live in a community you know, of a vendor that you know... go spend some 20, 30 minutes with that person, talk about life, and you know, they'll feel safer because they're out there alone, the majority of them are."

Enamorado has helped start a GoFundMe for Francisco and gave him pepper spray. Francisco said he's okay but doesn't know if and when he'll start selling flowers again.

The Inglewood Police Department told ABC7 the incident is not being investigated as a hate crime and the charges filed are related to robbery.