The Los Angeles County District Attorney's Office tells ABC7 it's dropping the charges given "the totality of the circumstances."
KABC
By Marc Brown and Lisa Bartley 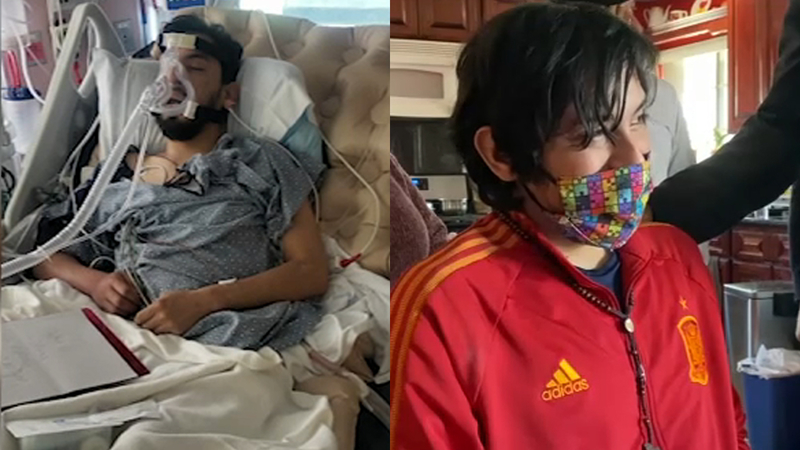 Charges dropped against man with autism shot, paralyzed by deputies

CUDAHY, Calif. (KABC) -- Isaias Cervantes was shot and left paralyzed by deputies with the Los Angeles County Sheriff's Department in March last year after his family called 911 asking for help.

Cervantes has autism and is mostly deaf. His family said he has the mental capacity of a 6-year-old.

His sister told the 911 operator that he was having "a mental health crisis" and that he had pushed their mom.

Cervantes' mom, Rosa Padilla, told deputies outside her home that night that her son was upset because he didn't get a snack.

The LASD's Mental Evaluation Team (MET), which is trained to intervene in this type of case, was never dispatched to the scene.

Instead, two deputies out of the East L.A. patrol station entered the home and began to place Cervantes in handcuffs. Body camera footage released by LASD shows him sitting calmly on the couch until the deputies moved to handcuff him.

A struggle ensued and Dep. Jonathan Miramontes claims Cervantes grabbed his gun. Within 40 seconds of entering the home, Cervantes had been shot by the other responding deputy. The bullet went through his spine and punctured his lung.

READ ALSO | In LA, many mental health calls to police are ending in tragedy. Here's what we found
EMBED More News Videos

In more than half of the nearly 3,000 serious use of force incidents reported between 2016 and 2019, civilians had some type of impairment. People described as having a mental health problem or as "erratic" were most likely to die as a result of these serious incidents.

Cervantes spent months in the hospital and now requires the use of a wheelchair. He still has bullet fragments lodged inside his body.

He was born with special needs, as was his twin brother Isaac.

"I want to say that Isaias' life and our family's life has been changed completely," Padilla told Eyewitness News. "It's very painful every day to process and understand that I have two sons who require help to stand every day. It has changed the dynamics of our family completely."

Seven months after the shooting, Cervantes and his family received a letter from the Los Angeles County District Attorney's Office, notifying them that he had been charged with three felony counts of assault on a peace officer and resisting arrest - charges that could send the 26-year-old to prison.

"That charge is usually the bad guys out there either shooting cops or attacking or using a knife lunging at a police officer," explained attorney Austin Dove, who is representing the Cervantes family. "It's a very serious charge. This is an absolute reach by them and a clear effort to avoid responsibility. And really, it's a bullying tactic. It's intimidation, and it's an attempt to distort the truth in this case and delay justice for this family."

In bodycam video from that night, Miramontes can be heard saying that Cervantes "scratched his eye" and "was scratching his face."

A narrator on the LASD "critical incident" video said that Cervantes punched the deputy in the face and used his hand to gouge the deputy's face and eyes.

An attorney for Miramontes did not respond to ABC7's request for clarification on the deputy's injuries.

Meanwhile, L.A. County Sheriff Alex Villanueva has been vocal about training his deputies to interact with members of the community who have autism in a safe and compassionate way.

Eyewitness News asked him why his department submitted a case to the district attorney's office that led to the three felony charges against Cervantes, given that he is autistic.

"No, no, no, he was not autistic," Villanueva responded during a November interview. "That's part of the problem right there. That was a lawyer diagnosis, it was not a medical diagnosis."

The records show that he also suffers from obsessive compulsive disorder (OCD), social phobia, and hearing loss among other medical issues.

During the same November interview, Villanueva also seemed to question if Cervantes was actually paralyzed.

"Actually, that part, I don't think that information is available or known yet," responded Villanueva.

"Whether he's paralyzed?" ABC7 asked, to which Villanueva nodded yes.

"I would like him to take some time, even a minute, to come see how he's now living his life in a wheelchair and in a bed without being able to move," said Padilla when we recounted Villanueva's comments.

Eyewitness News had just concluded interviews with Dove and the Cervantes family on Thursday when Dove received an email from the district attorney's office notifying him that the county was planning to drop the criminal charges against Cervantes.

The DA's office tells ABC7 it's dropping the charges given "the totality of the circumstances."

Cervantes was due to be arraigned on Wednesday.

Instead, that is now the day the DA's office will officially withdraw the charges against him.

Dove suspects the decision may also have something to do with the fact that Miramontes is facing a felony charge himself for allegedly lying in a police report after a pursuit and shooting in 2018. Miramontes has pleaded not guilty and is on administrative leave from the department.

At the Cervantes home on Thursday, it wasn't clear if Cervantes understood the gravity of the charges against him or that the fact that they were now dropped, but his mother calls it all a miracle.

"I'm very happy with these decisions today and I'm very, very glad," Padilla said. "This is a miracle, miracle for my family."

It's unclear why the LASD's MET team was never dispatched to the scene that night.

Villanueva and others are pushing for more funding in hopes of expanding the team.

In November, the LASD unveiled a "special alert" program that allows families or caregivers to notify the department ahead of time if a person with special needs is living at a home.

Once a family fills out the "special alert" form online, dispatchers will receive that information if a call is placed for help from that address.

Deputies dispatched to the scene will be alerted ahead of time to the special needs and any other calls for service for those deputies should be eliminated from their work load.

The program also requires that a watch sergeant ensures the LASD's MET Team is called and that a field sergeant is dispatched to the scene.