In LA, many mental health calls to police are ending in tragedy. Here's what we found

People described as having a mental health problem or as "erratic" were most likely to die as a result of serious uses of force.
KABC
By Marc Brown and Lisa Bartley and Grace Manthey 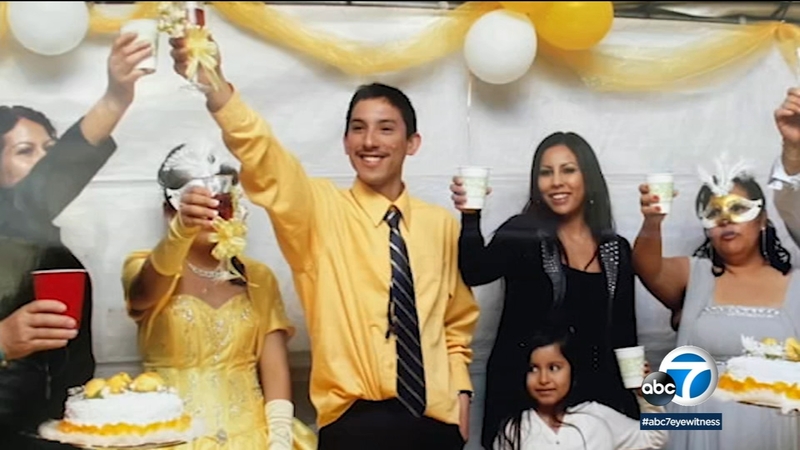 She is the mother of Isaias Cervantes, a 25-year-old mostly deaf man with autism who was shot and paralyzed by a Los Angeles County Sheriff's deputy after his sister called the department to help with him in late March.

"This situation has changed our lives. Everyone in our family," Padilla told Eyewitness News in Spanish.

Cervantes has been hospitalized since the shooting. Padilla said her son woke up "traumatized," unable to walk, and didn't understand why.

"He didn't want me to leave the hospital. He would say 'mommy, stay here.' He would grab me. And he would say that he had lots of nightmares," she said.

Body camera footage shows the deputies walking into Cervantes's house. The deputies told Cervantes that he wasn't under arrest, but within seconds of entering the home, they started to handcuff him.

The family plans to file a lawsuit against the Sheriff's department. They have filed a writ to try to force the release records from the case, including of the names of the deputies involved, all videos of the incident and incident reports.

Austin Dove, the family's attorney, said the case is a "searing example of discrimination and abuse."

"They didn't use any of the training that is required by law to undertake this de-escalation when you're dealing with an individual as they were told, with any sort of mental condition," Dove said.

LASD said deputies grabbed both of his arms and stood Cervantes up, which is when his "demeanor suddenly changed from cooperative to assaultive" and he grabbed one of the deputy's guns.

"What he had a problem with, and rightfully so, was when they went to go put hands on him, and we can see from the [bodycam] video that it was very forceful and very abrupt and a very aggressive," Dove said.

Isaias's mother said he has the intellectual capacity of a six-year-old, so it's unlikely understood what was happening when deputies went to handcuff him.

Statewide, in serious use of force incidents between 2016 and 2019, more than half involved civilians with some sort of impairment, according to an ABC7 Eyewitness News analysis of data from the California Department of Justice.

These incidents do not reflect all use of force cases, only those that resulted in injury, death, or involved a firearm, which agencies are required to submit to the California Department of Justice.

Another family is grieving the loss of their son, David Ordaz, Jr. They called for help in March after Ordaz, who was schizophrenic, threatened to commit suicide. A family attorney said Ordaz was holding a small kitchen knife outside their East Los Angeles home.

LASD said Ordaz moved toward deputies after he was initially hit by less than lethal rounds, and that's when they opened fire, killing him. The family said Ordaz was not an immediate threat to deputies.

Deputies also killed 39-year-old Eric Briceno inside his Maywood home last March after his family called for help with his mental health crisis. The family says Briceno was asleep in bed by the time deputies arrived. According to their lawsuit, deputies woke Briceno up, tasered him seven times and beat him. Deputies deny this, and an autopsy report says that Briceno "resisted arrest."

"It's almost like law enforcement is becoming a contact sport. And it should not be," said Timothy T. Williams, Jr., a police procedure and practices, use of force and wrongful conviction expert.

"If you had mental health experts deployed, perhaps these individuals would be alive today," Williams said, speaking in general about victims with mental health problems.

The Sheriff's Department has what they call Mental Evaluation Teams. According to LASD, MET units responded to just over 7,000 reported mental health crises, about 69% of all reported crises.

LASD declined to comment on the case or say if a Mental Evaluation Team was called for Eric Briceno's crisis.

An LASD MET unit was called to the scene where David Ordaz, Jr. died, but did not arrive before the responding deputies.

In the case of Isaias Cervantes, the LASD's MET unit was not dispatched to the scene.

Officials from LASD said they are working with the Los Angeles County Department of Mental Health to get money to nearly double the number of MET units. Currently, they have 33 teams and they want to get to at least 60, but they need the funding.

LAPD's Mental Evaluation Unit recently adapted its Systemwide Mental Assessment Response Team model from a "secondary responder" to a "co-responder." The SMART units, according to LAPD, are dispatched to calls meeting certain criteria at the same time as the patrol unit. Previously, the officers would have to request SMART support.

Officials from LAPD also said they would like to double their SMART units and have the city grow other unarmed response efforts. They said it would allow them to better respond to calls generated from a mental health crisis.

"You've got to embed experts into your daily deployment. People who are trained in mental health issues, and you've got to deploy them when these issues come up," Williams said.

Statewide, there is also a push for increased training.

"Anytime you have the ability to deescalate a situation, you're going to have a better outcome," Portantino said. "And if you're trained in escalation, if you're trained in, you know, the use of your firearm piece, but not in how to deal with the situation when the firearm is in your holster we're not doing a good job for the public if we don't do both scenarios," he said.

It's why he said the thinks the curriculum is so important, and it's what communities are "clamoring for."

"Because we see what happens when a use of force is used in a questionable or unjustified perspective," he said.

In Riverside County at the Chino Police Department, Corporal Ryan Tillman said training is "monumental when it comes to the actions that we take as officers."

Tillman, who is also the CEO of a company called Breaking Barriers United, aimed at improving the relationship between law enforcement and the community, is part of the Chino PD Crisis Intervention Team. The CIT attempts to get to know people with mental problems and their families to help them access resources.

But Judy Mark, the president of Disability Voices United, said she is "done with training police officers."

"I used to believe that if you just train them just taught them what autism looks like and how to interact with people with autism that would be enough, but there's no way that one or two hours of training over a lifetime of police enforcement that you're going to be able to have that kind of impact that you need to on those officers," she said.

Mark has a 24-year-old son with autism, and she said she lives in fear that something like what happened to Isaias Cervantes could happen to her son.

"I now realize there's got to be a different way, that when people with autism or mental health disability or behavioral disability, where they are needing some intervention that we have to have a different number that we can call," Mark said.

Assembly Bill 988 aims to do just that - establish a mental health crisis line using the digits "988," similar to 911, that would be able to deploy mental health services.

"There has to be community-based unarmed crisis teams that come in to support families and individuals when they're in crisis, instead of having an armed officer who is used to dealing with criminals, who is going to be too quick to take out their gun and shoot somebody," said Mark.

THE DIFFERENCE BETWEEN CHANGE AND REFORM

According to police expert Timothy T. Williams, Jr., policies aren't going to make the difference many are looking for. He said the system needs reform, which is different than change.

"Change is like putting a policy in place to stop a situation from happening again, reform is making sure you get the right people on the job, so that you won't have these issues to deal with in the first place," he said.

He said there are certain core values he sees absent from law enforcement. Core values that you can't learn from the academy, like a reverence for life, compassion and a commitment to treating one another with respect.

Management, he said, also has to be different. They can't ratify bad conduct, and they must be willing to "call balls and strikes."

"I call it the accordion approach," he said. "An accordion, you pull out, and you get all the air in and then when you push it in is when the music comes."

Law enforcement, shouldn't be "a bunch of gladiators," he said. "I want somebody who's gonna protect and serve, I don't want nobody that can come in there, put the gloves on and get ready to rock and roll, so to speak."

Disability Voices United president, Judy Mark, said law enforcement needs to work to build back the trust of the community.

"We have no trust anymore and we don't trust people carrying guns, and that's not a good thing for society. We have to trust in law enforcement," she said.

Rosa Padilla said she doesn't want something like what happened to her son, Isaias Cervantes, to happen to anyone else.

"All they want is a good future to be with their family to live every day to the maximum to be around their family," she said in Spanish.

Padilla said her and her family have a lot of faith that Cervantes will walk again.

"That's what we are thinking, believing," she said.