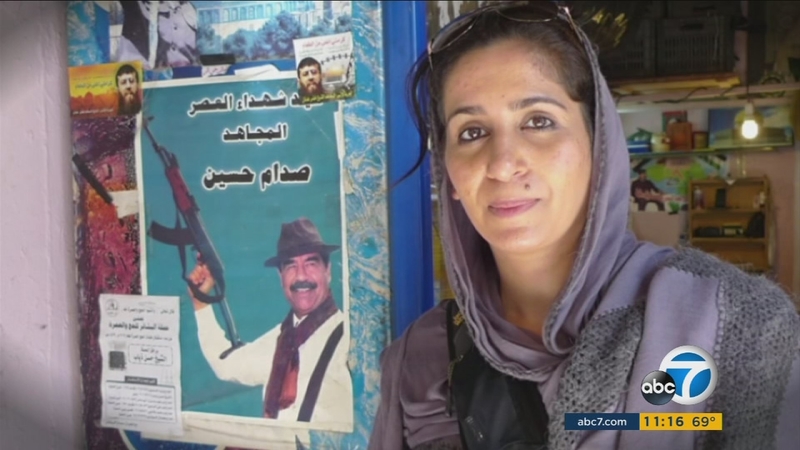 LOS ANGELES (KABC) -- ISIS is filled with some of the most violent, radical and secretive men in the world. Yet, incredibly, many of its leaders have come to trust a "mainstream media" reporter.

She's an unmarried female with a Muslim background that reports for the Washington Post. Her name is Souad Mekhennet.

She's written a new book about her journey called "I Was Told to Come Alone." Jihadi leaders often ask her to come to their meetings alone, without a phone, ID, or any tracking devices.

"Is it dangerous? Yes. Have I risked my life several times? I did. But I believe it's important. I think it's my duty as a journalist to give readers the access," she said.

"They blindfold you and threaten you with rape, and you find yourself in an interrogation with guns to your head," she said.

Like so many, Souad's life changed dramatically after the terrorist attacks of Sept. 11.

She was with a group of journalist who met a 9/11 widow whose husband was a firefighter.

"She turned to us and she said I'm holding you guys in the media, in some part, responsible to what happened to us after 9/11," she said.

"We all looked at her and said, why? And she said because nobody told us there are people out there who are hating us so much. And why are they hating us so much? If we had known something, maybe we could have stopped it," she said.

That was a defining moment.

"I decided that day I wanted to do whatever I can to help people understand the dynamics and get the message from the horse's mouth," she said.

In college, Souad studied in Hamburg, Germany. After 9/11, she realized that hijacker Mohammed Atta also lived there.

Souad began her reporting by talking to those who knew Atta.
"It wasn't easy to get this access," she said. "It's not like I go into the meeting starting right away with the tough questions. I start with the softer questions, but then I would push further.

"Why do they speak to me? It's because they know I'm not taking sides. In my reporting, in the articles, they know I'm staying neutral."

Souad said that being a female in this world of alpha-male, religious conservatives can be both a positive and negative.

"This is a story that tells guys and everybody that a woman can do it too," she said.

She said several of her interview subjects proposed.

"Some marriage proposals would happen and then one of the challenges would be, how do you say no in a way where they don't feel insulted?" she said.

She'd tell the men that her father has to approve of her wedding first. Thankfully, she said, she was able to hold off their advances.

Souad said she'd try to befriend the jihadi leaders' mothers. They'd then tell their sons to be kind to her.

Sometimes, though, she'd push too hard and have to tread lightly. She recalls being in a cab with a jihadi leader.

"I would see his hand would go up to this pocket, he had a gun there," she said. "I understand you can't go any further."

Souad said her sources were infuriated by the Iraq War.

"They believe we were hypocrites," she said.

She said they were frustrated after President George W. Bush talked about weapons of mass destruction, which never materialized.

"There were no weapons of mass destruction, they see that there were no consequences. A lot of the people who I interview, who were radicalized and grew up in Western countries say those are double standards," she said.

In 2015, Souad helped break the story of "Jihadi John's" identity. He was the British citizen featured in several ISIS videos showing decapitations.

"I had a source inside ISIS, but you can't just pick up your phone and contact them," she said.

She was given a "burner" phone and instructions on when to call. She had just one opportunity to get the information.

It helped to piece together the puzzle of naming Mohammed Emwazi as "Jihadi John."

Mekhennet's newest assignment is looking at radicalization in America.

She said President Trump's rhetoric about banning Muslims is not helpful.

She added, "The person that believes he or she is a full-fledged member of the society will do whatever he can do to protect it. The problem starts when people believe they are no longer wanted or equal in the society."

"If we want to find ways to fight radicalization and find solutions, we have to understand what is going on in the hearts and minds of those people," she said. "It might save lives, that's why I'm willing to risk my life."

"I really believe for the sake of telling the story and getting the real view and inside for the reader, it's worth it."