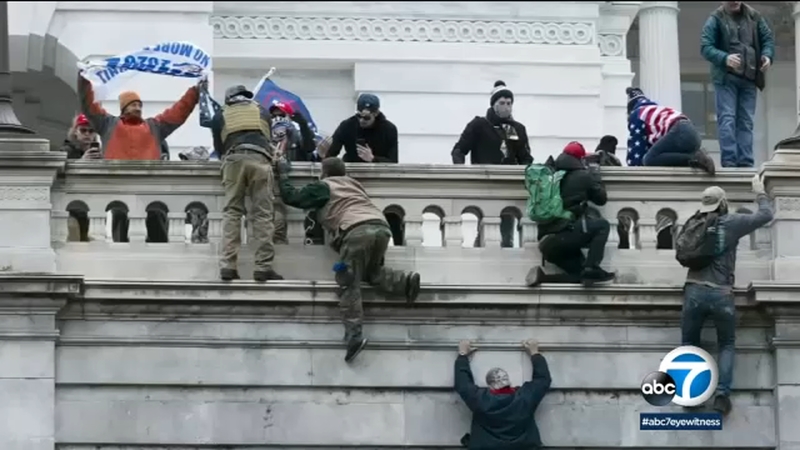 LOS ANGELES (CNS) -- A Los Angeles man accused of joining the Jan. 6 Capitol breach in Washington, D.C., was arrested on charges of conspiracy and other crimes, according to the Department of Justice.

Edward Badalian, 27, of Los Angeles, was charged in an indictment with conspiracy, obstruction of an official proceeding and aiding and abetting, tampering with documents or proceedings, and other offenses, prosecutors said. The indictment was unsealed Monday in the District of Columbia.

Badalian was arrested Nov. 17 in Los Angeles and was arraigned Nov. 23 in the District of Columbia.

Badalian is charged along with Daniel Rodriguez, 39, of Fontana. Rodriguez was indicted in March on charges including the assault of Metropolitan Police Department Officer Michael Fanone. He was subsequently charged with conspiracy along with Badalian. Rodriguez has been in custody since his arrest on March 31, according to prosecutors.

After flaunting her participation in the Capitol riot, authorities said Jennifer Leigh Ryan bragged she was not going to jail because she is white and has blond hair.

According to the indictment, Badalian, Rodriguez and others created a Telegram group chat in fall 2020 called the Patriots 45 MAGA Gang and used it to advocate violence against groups and individuals that either supported the 2020 presidential election results, supported what the group perceived as liberal, or communist ideologies, or held positions of authority in government,'' according to the Department of Justice said.

Prosecutors contend the defendants conspired to stall the congressional certification of the presidential election results, and they collected weapons and tactical gear and stormed the Capitol on Jan. 6.

In the 10 months since Jan. 6, more than 675 individuals have been arrested for crimes related to the breach of the U.S. Capitol, including 210 individuals charged with assaulting or impeding law enforcement, according to the U.S. Department of Justice.

An Orange County man who took a selfie from the Jan. 6 Capitol insurrection has been arrested after someone in his prayer group tipped off the FBI.