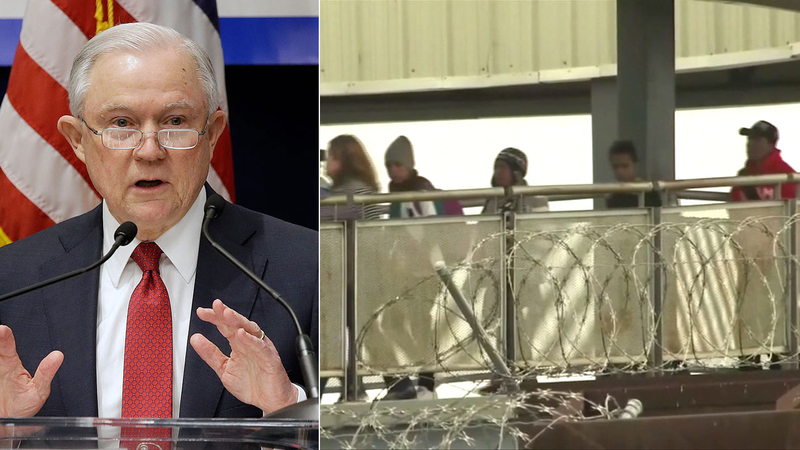 Sessions held a press conference around 1 p.m. discussing a zero-tolerance policy toward people who enter the U.S. illegally.

The conference was interrupted for a few moments by a lone protester with a megaphone, who talked about splitting up immigrant families.

The deputy director of ICE, Thomas Homan, took time to address that concern.

"We aren't making any laws up. We are enforcing the laws enacted by Congress. These are laws on the books, laws that we all took an oath to enforce," he said.

The U.S. Department of Homeland Security called what is happening at the border a "growing migrant crisis" and said attempted border crossings in March increased by 200 percent compared to last year, when illegal crossings were at historic lows.

Nearly one of every four Border Patrol arrests on the Mexican border from October through April was someone who came in a family, meaning any large increase in prosecutions is likely to cause parents to be separated from their children while they face charges and do time in jail.

Children who are separated from their parents would be put under supervision of the U.S. Health and Human Services Department, Sessions said. The department's Office of Refugee Resettlement releases children traveling alone to family and places them in shelters.

Just last week, President Donald Trump shared his frustration as a caravan of more than 200 migrants from Central America made the trek to Tijuana to escape violence in their home countries.

RELATED: Everything you need to know about the migrant caravan

More than 150 of them have turned themselves into American authorities to claim asylum.

Sessions echoed the president's comments, calling the caravan a "deliberate attempt to undermine our laws and overwhelm our system."

After protesting in Mexico's capital city, a smaller caravan of migrants is heading northward to formally request asylum.

Thirty-five federal prosecutors and 18 immigration judges have been re-directed to the border to handle immigration cases.