Joaquin Phoenix's 'Joker' acceptance speech: 'I have been a scoundrel in my life' 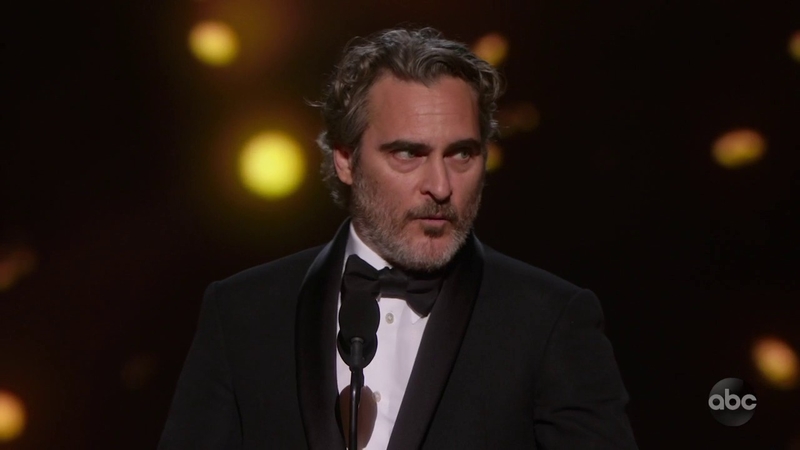 LOS ANGELES -- Joaquin Phoenix has won the Academy Award for best actor for his role in "Joker."

Phoenix's win Sunday marked the first time the actor took home an Oscar. He's been nominated several times, including for "Gladiator" in 2001, "Walk the Line" in 2006 and "The Master" in 2013.

"I think that we send a very clear message to people of color that you're not welcome here," he said. "I think that's the message that we're sending to people that have contributed so much to our medium and our industry and in ways that we benefit from."

"I think, whether we're talking about gender inequality, or racism, or queer rights, or indigenous rights, or animal rights, we're talking about the fight against injustice. We're talking about the fight against the belief that one nation, one people, one race, one gender, or one species has the right to dominate, control and use and exploit another with impunity," Phoenix said Sunday. "I think that we've become very disconnected from the natural world, and many of us, what we're guilty of is an egocentric worldview, the belief that we're the center of the universe."

As he did at BAFTA, Phoenix called himself out for being "part of the problem."

"Now I have been, I have been a scoundrel in my life. I've been selfish, I've been cruel at times, hard to work with, and I'm grateful that so many of you in this room have given me a second chance," Phoenix said on Sunday. "And I think that's when we're at our best, when we support each other, not when we cancel each other out for past mistakes, but when we help each other to grow, when we educate each other, when we guide each other toward redemption. That is the best of humanity."

Phoenix also became emotional during his speech when he spoke about his late brother River Phoenix, who died from an overdose in 1993.

"When I was 17, my brother wrote this lyric, 'Run to the rescue with love and peace will follow,'" Phoenix said.