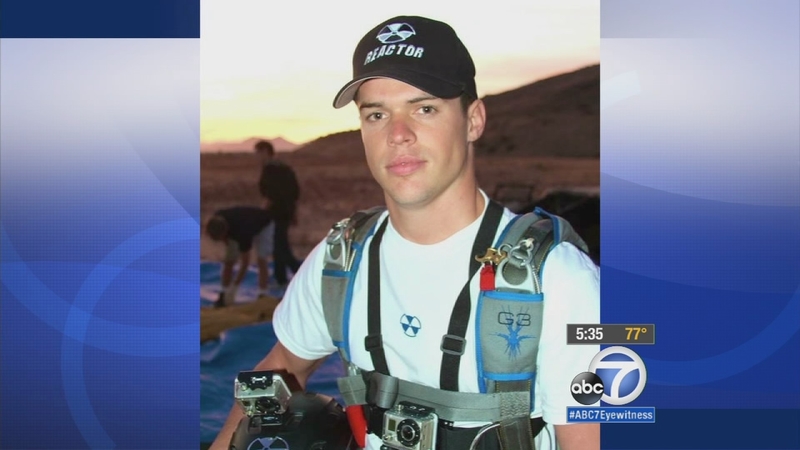 MALIBU, Calif. (KABC) -- A young adventurer from Malibu, who set records climbing the world's tallest mountains, died Thursday in a wingsuit crash in the Swiss Alps.

In his 23 years, Johnny Strange viewed the world from angles most people will never see with their own eyes. He was a skydiver and a wingsuit flyer.

He shot video soaring off the top of a mountain in Switzerland. Days later, on another jump, he crashed after takeoff.

Mackenna Strange says her brother died doing what he loved.

"Johnny himself said all the time, 'If I'm not allowed to do the things I love, I'm already dead,'" she said. "So even though it was 23 years, it was 23 years where he didn't live a day that wasn't full of adventure."

The Malibu High School and USC grad was passionate about politics and causes close to his heart.

"My dad has had Parkinson's for almost 20 years, and Johnny planted a flag that said 'cure Parkinson's' on top of Mt. Everest," friend Jake Wisnicki said.

Friends say Strange accepted the risks he would take without fear but was not reckless.

"I think Johnny was a real-life action hero. He literally had composure at everything he did," family friend Ted Silverberg said. "If he had fear, he never showed it. Johnny saw life and the things that came with it as a challenge."

Although they are grieving, his family and friends are remembering the energy he brought to their lives and its lasting impact.

"We've lost a really memorable guy, but what the family and our friends can take comfort in is we do have those memories," friend Joe Rosenthal said.