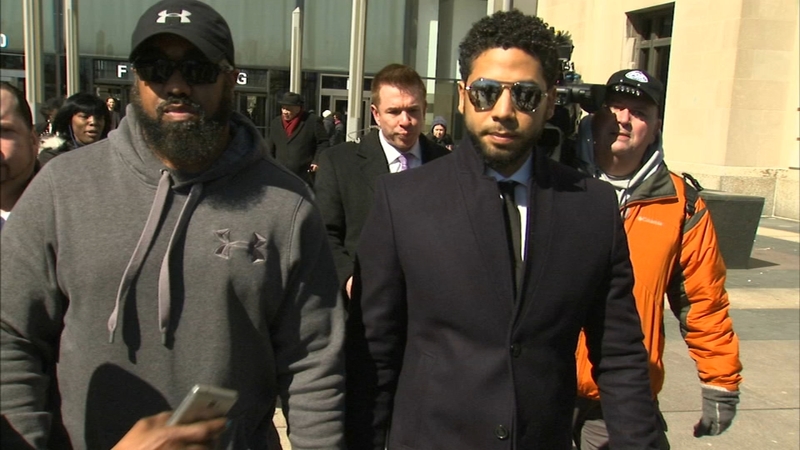 Webb released a statement, saying a Cook County grand jury returned a six-count indictment against Smollett, charging him with making four separate false reports to Chicago police "related to his false claims that he was the victim of a hate crime, knowing he was not the victim of a crime."

Webb said he has arranged with Smollett's lawyers to have the actor turn himself in for his arraignment on Feb. 24 at 9:30 a.m.

Last year Smollett claimed he had been attacked by two men who yelled racist and homophobic slurs at him. He was originally charged with 16 counts of felony disorderly conduct for allegedly lying to police about the alleged attack. Police said Smollett staged the attack on himself because he was unhappy with his "Empire" salary.

Police and prosecutors said Smollett orchestrated the attack with the help of the Osundairo brothers. One brother was an extra on "Empire" and the other was Smollett's personal trainer.

All charges against Smollett were dropped in late February 2019 in exchange for community service and forfeiture of his $10,000 bond payment.

Webb, a former US Attorney in Chicago, was appointed as special prosecutor after the charges were dropped to review the Cook County State's Attorney's Office's decision.

In an interview with the I-Team in November 2019, Cook County State's Attorney Kim Foxx suggested that Smollett was treated in a manner consistent with defendants in cases like his. But Webb said the state's attorney has been unable to provide evidence of similarly handled cases, and that he disagrees with how she resolved the case.

"Realistically the only thing which makes it unique is it's a star, is somebody who was a notorious person, somebody who was a superstar," said Professor Richard Kling, University of Chicago Kent College of Law. "Other than that, it's your run-of-the-mill case, it's a disorderly conduct. It's a class four felony. People are charged every single day with filing false police reports. And they end up going on their very merry ways."

Further prosecution of Smollett is "in the interest of justice," Webb said in a lengthy statement.

Webb said his investigation was into whether Smollett should be further prosecuted for alleged false police reports, and whether any person or office involved in the investigation engaged in any wrongdoing, including the Cook County State's Attorney's Office.

He said he "disagrees with the state's attorney's" original decision to drop the charges against Smollett after he was initially indicted, said he found the evidence "was strong" and that the state's attorney provided no proof there was no evidence that would have justified dropping the case against the actor, or previous similar case history.

He said he has not yet reached any conclusions as to the second part of the investigation, including in regards to the State's Attorney's Office, and that his investigation into whether any person or office involved in the investigation engaged in wrongdoing is ongoing.

Smollett's legal team released a statement, saying in part, "After more than five months of investigation, the Office of the Special Prosecutor has not found any evidence of wrongdoing whatsoever related to the dismissal of the charges against Mr. Smollett. Rather, the charges were appropriately dismissed the first time because they were not supported by the evidence. The attempt to re-prosecute Mr. Smollett one year later on the eve of the Cook County State's Attorney election is clearly all about politics not justice."

The city of Chicago also released a statement, saying, "We look forward to reviewing the indictment and, as we have said previously, the City stands by our original complaint seeking to recover costs for Mr. Smollett's false statements. We again thank the Chicago Police Department detectives for their hard work on the original investigation."

The new charges against Jussie Smollett come a month before the Illinois primary, as Kim Foxx makes her bid to the county for re-election.

Foxx has repeatedly tried to downplay her decision to drop the original charges against Smollett as a bad decision because it was not done transparently. But the decision Tuesday to indict him again adds a new twist that will only serve to make it a dominating issue in the state' sattorney's race.

Foxx was gathered with dozens of African American pastors who endorsed her Tuesday afternoon, but they found themselves on the defensive as word spread of the new charges.

Foxx and the pastors accused Webb of trying to influence the March 17 primary in which Foxx's opponents have tried to make the Smollett case a political issue.

"It's very interesting that Dan Webb at this moment, as we are a month away from an election, is now offering charges," said Rev. Otis Moss, III. "This seems very similar to when James Comey intervened in reference to the national election, and so we are seeing, at this moment, some politicization of this particular election. And as a coalition we will not stand for people who are trying to step in and muddy the waters. We need people who are ethical, who are qualified, and who are progressive."

Foxx spoke at the same event.

"I am an elected leader and I have to be accountable for the actions of not only myself but my office. And I don't run from that responsibility," she said.

Her opponent Bill Conway has been hammering the airways for weeks with an ad criticizing Foxx for giving Smollett preferential treatment compared to his client, charged with a similar crime.

"What I will say is we have an obligation to be transparent in everything that we do. And we dropped the ball in our transparency in the way that we handled this case."

Another opponent, Donna More, issued a statement saying, "This can no longer be considered just an error in judgment or a disappointing lack of transparency. There may be significant wrongdoing on the part of the State's Attorney."

Webb said he has not reached a conclusion on whether Foxx or anyone in her office committed any wrongdoing, but added that part of his investigation is ongoing.

Foxx's campaign also raised questions about the timing of the charges in a statement Tuesday, also calling it James Comey-like, saying it was "something voters in the era of Donald Trump should consider offensive."

Former mayor Rahm Emanuel, who was highly critical of Foxx's decision to drop charges against Smollett, would only say, "You don't need me to comment or interpret it. It speaks for itself."