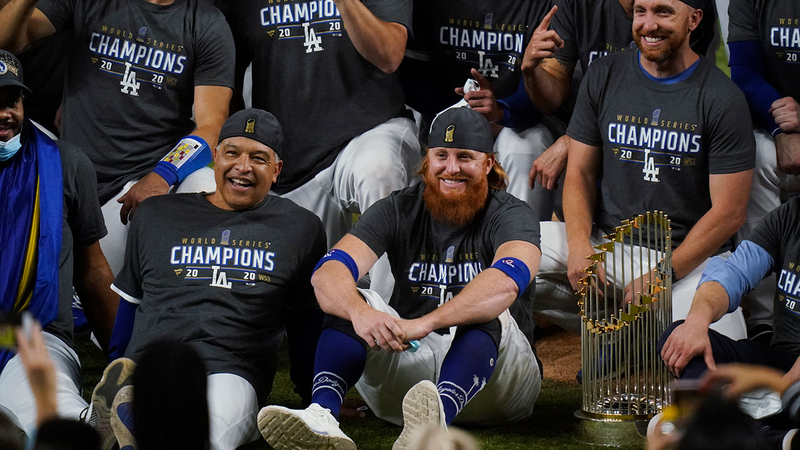 LOS ANGELES (KABC) -- The Los Angeles Dodgers' Justin Turner was removed during Game 6 of the World Series after he tested positive for COVID-19, sources confirm to ESPN.

Turner, who plays third base, was in the lineup and played during the Dodgers' World Series-clinching victory until he was removed after the seventh inning. The Dodgers did not provide a reason on why he was removed.

"Thanks to everyone reaching out! I feel great, no symptoms at all. Just experienced every emotion you can possibly imagine. Can't believe I couldn't be out there to celebrate with my guys! So proud of this team & unbelievably happy for the City of LA #WorldSeriesChamps," Turner tweeted.

Thanks to everyone reaching out! I feel great, no symptoms at all. Just experienced every emotion you can possibly imagine. Can’t believe I couldn’t be out there to celebrate with my guys! So proud of this team & unbelievably happy for the City of LA#WorldSeriesChamps

Turner was not immediately on the field as L.A. celebrated its first championship since 1988. Dodgers players and coaches wore face masks during the celebration. There was no dogpile on the infield that's typical of such celebrations, although there were still hugs and high fives.

Later, the 35-year-old infielder was seen on the field about an hour after the game and took photos with the World Series trophy. ESPN reports Turner, 35, hugged Clayton Kershaw and sat front and center next to manager Dave Roberts for a team photo, occasionally lowering a mask he otherwise wore throughout the celebration.

Mookie Betts, when asked about Turner returning to the field to join the Dodgers for a team picture, defended his teammate.

The team issued a statement Wednesday acknowledging that the coronavirus pandemic will eliminate any chance of a victory parade in the near future.

"This season was everything we believed it could be. It was just missing one thing: the best fans in baseball. While the wait for a World Championship is finally over, a celebration worthy of our great fans and the city of Los Angeles will unfortunately have to wait until it is safe to do so. We can't wait to celebrate together," the team said.

According to ESPN's Jeff Passan, during the second inning, the lab conducting coronavirus testing informed Major League Baseball that Turner's test from Monday came back inconclusive, but when samples from Tuesday arrived, a positive result came back.

"The league immediately called the Dodgers and said to pull Turner," Passan reported.

In the second inning tonight, the lab doing COVID tests informed MLB that Justin Turner’s test from yesterday came back inconclusive. The samples from today had just arrived and were run. It showed up positive. The league immediately called the Dodgers and said to pull Turner.

"When the Dodgers return to their hotel tonight, everybody will be given a rapid PCR test... Unclear as to whether they'll stay in Dallas area before traveling back to Los Angeles. Situation fluid right now," Passan tweeted.

"We learned during the game Justin tested positive and he was immediately isolated to prevent spread," Commissioner Rob Manfred said after presenting L.A. with the championship trophy.

MLB insulated postseason teams in neutral-site bubbles after traveling them across the country during a shortened 60-game season. Turner was the first player since the playoffs began to be flagged for the coronavirus.

Turner has been a staple in the Dodgers' lineup for seven of their eight consecutive NL West titles. A late-blooming slugger who helped reshape the game by succeeding with an upper-cut swing, Turner is L.A.'s career leader with 12 postseason home runs, including a pair in this Series, in which he hit .364 and also played stellar defense.

The Dodgers won their first World Series title in 32 years after beating the Tampa Bay Rays 3-1 on Tuesday.