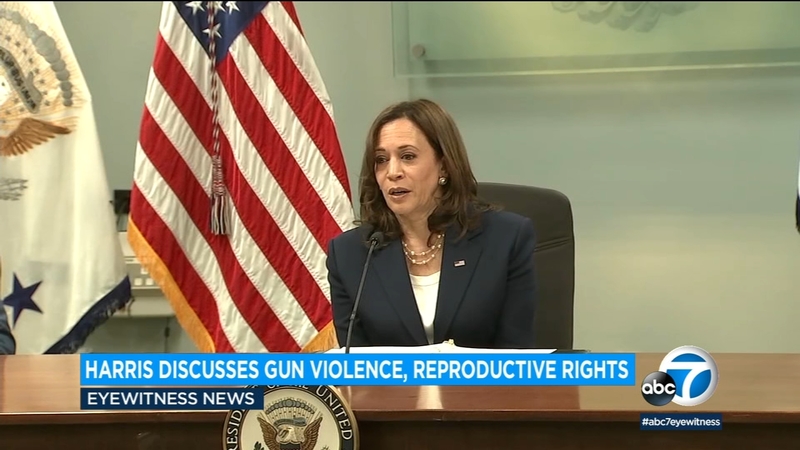 LOS ANGELES (KABC) -- Vice President Kamala Harris is in Southern California for this week's Summit of the Americas.

Harris met with faith leaders to discuss the epidemic of gun violence among several other issues on Monday.

Eyewitness News traveled with Harris Monday as she made two stops in Los Angeles.

They participated in a roundtable discussion on gun violence and reproductive rights.

Harris reacted to a bill in the state of Louisiana that would ban most abortions with no exception of rape or incest, describing it as an imminent threat in light of the expected ruling on Roe v. Wade by the U.S. Supreme Court.

A group of U.S. state legislators from Texas, Colorado, Arizona, New Mexico and North Carolina toured Mexico and said this week they are impressed by efforts to expand abortion access south of the border.

A leaked draft opinion suggests the conservative majority will overturn the landmark ruling.

Harris spoke to the potential indirect impact of the ruling on access to contraception and even interracial marriage.

"How will we then, as those who are guided by our faith, who believe in the best of what we are, and who we can be, how will we speak or talk about the people who are going to be directly impacted by that decision," Harris said. "And how we uplift them in a way that they do not feel alone and without options."

Harris then met with international civil society organizations as part of the Summit for the Americas -- organizations that work to advance women's rights and youth advocacy in the Caribbean North and Latin America.

The press did not get to speak with Harris and ask her any questions. She's expected to discuss migration on the southern border later this week.