Keke Palmer shares powerful message with National Guard, asking them to 'march beside us'

The actress implored members of the National Guard to "make history with us" during a peaceful demonstration.
OTRC
By Andrea Lans 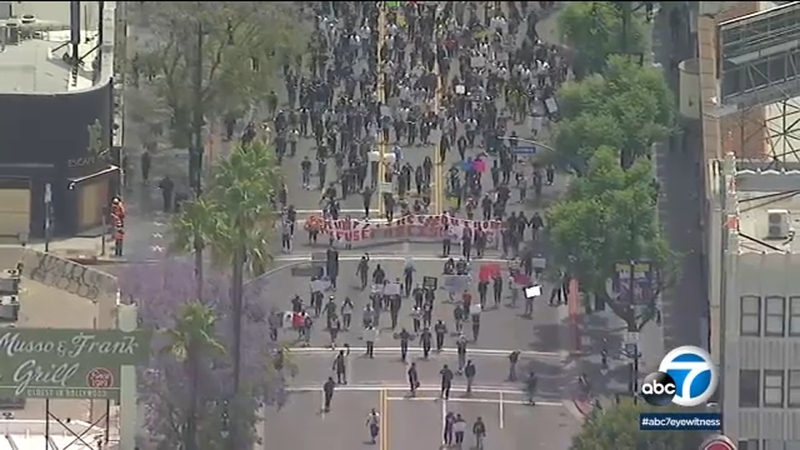 HOLLYWOOD, LOS ANGELES -- Keke Palmer joined thousands of protesters in a peaceful march in Hollywood on Tuesday. Since then, a video of the actress sharing a powerful message with members of the National Guard has surfaced.

In a video that has now gone viral, Palmer spoke passionately to several members of the National Guard, asking them to "march with us."

"You have people in here that need your help. This is when y'all stand together with the community, with society to stop the governmental oppression," Palmer said.

The actress continued: "March beside us. Let the revolution be televised. March beside us and show us that you're here for us. Let's just do it. We start marching and you march with us. Make history with us, please."

After Palmer's plea, one guard agreed to march with them to the end of the block, but said he was not allowed to leave his post.

One of the other protesters can be heard asking the guardsmen to take a knee, which they all proceeded to do. While some of the protesters cheered, Palmer wasn't satisfied.

The "Strahan, Sara and Keke" co-host made an appearance on Good Morning America on Wednesday to elaborate on the sentiments she expressed the day prior.

"I, as a citizen, want to know: What side of history are you trying to be on?" Palmer said.

“Buildings can be rebuilt, but once lives are taken, they’re gone.”@KekePalmer speaks out on asking National Guardsman to march with her and why it’s important to her to be on the front lines of the protests over the death of George Floyd. https://t.co/GVhFAoPK2S pic.twitter.com/q14UYjq9tN

"I want to know that the people in these powerful positions of saving or taking a life, I want to know they're with the citizens and committed to taking a stand against the system and the injustices. And if we are unified...we can create change," Palmer explained to Good Morning America anchor Robin Roberts.

Palmer also addressed the looting and vandalism that have occurred: "Buildings can be rebuilt, but once lives are taken, they're gone."

In an Instagram video, Palmer expanded her thoughts on the George Floyd protests and Black Lives Matter movement.