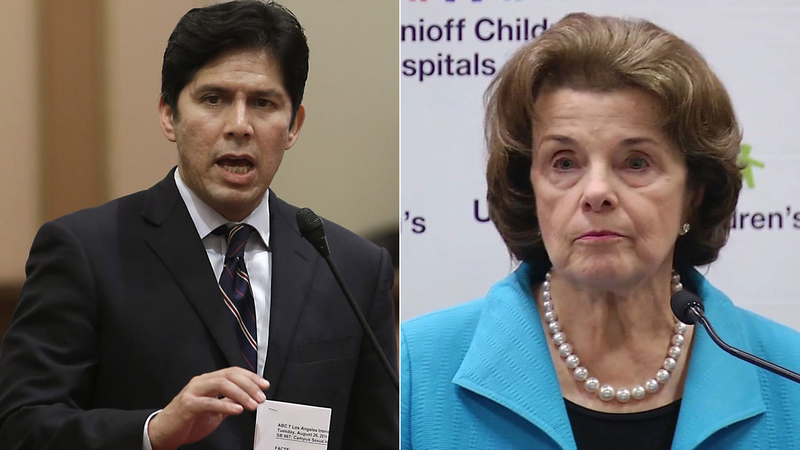 The 84-year-old Feinstein, a former San Francisco mayor and grande dame of California Democrats, will face the 50-year-old state legislative leader who is largely unknown statewide.

In a brief video announcement posted online, De Leon promised to work for job growth and economic security in Washington, recalling his single immigrant mother who cleaned homes to pay the bills.

In an accompanying statement emailed to supporters, he vowed to aggressively fight the agenda of President Donald Trump, continuing the resistance of California government to Trump's proposals on health care, immigration and climate change. Democrats hold every statewide office and control both chambers of the Legislature.

The statement echoed criticism from liberal activists that the centrist Feinstein has been too accommodating in some of her assessments of the White House. De Leon was among the Democrats who berated Feinstein last summer after she suggested Trump could learn in time to become a "good president."

"We now stand at the front lines of a historic struggle for the very soul of America, against a President without one," De Leon wrote.

Trump "disregards our voices. Demonizes our diversity. Attacks our civil rights, our clean air, our health access and our public safety," he said.

The Senate leader enters the race, by standard measures, a long shot. De Leon is prevented by term limits from seeking another trip to Sacramento.

Feinstein has been a political fixture in the heavily Democratic state for years and is closely associated with issues that typically drive state voters, including environmental protection and support for reproductive rights. She was first elected to the Senate in 1992, a groundbreaking year for women Senate candidates.

When she recently announced she would seek another term, she was quickly endorsed by some of the state's high-profile Democrats, including U.S. Sen. Kamala Harris and Los Angeles Mayor Eric Garcetti.

As two Democrats, Feinstein and De Leon share much of the same policy terrain. They raised similar issues in their campaign announcements, including what they described as the threat posed by Trump.

With much common ground, the contest is likely to be colored by age and ethnic differences, the state's longstanding north-south rivalry and ideological rifts that have divided Democrats nationwide.

Some liberals have argued that the moderate Feinstein is out of step with a California that has shifted to the political left. In his statement, De Leon made an appeal to the party's liberal wing, saying he intended to promote "a progressive agenda."

However, it might be a reach to fashion himself as a champion of the party's left wing, including those inspired by the outsider presidential candidacy of Vermont Sen. Bernie Sanders.

As leader of the state Senate, De Leon is by definition a member of the Democratic establishment. A look at his fundraising shows he has banked checks over the years from banking, oil, pharmaceutical and other corporate interests that often make liberals cringe.

He supported Hillary Clinton in 2016, not the insurgent Sanders.

In a bitter Democratic leadership fight in the state earlier this year, De Leon sided with the party establishment candidate for state chair, Eric Bauman, over Kimberly Ellis, who was backed by Sanders' loyalists.

"Let's not mince words: Kevin De Leon is no progressive," Ellis said in a statement Sunday. She added that De Leon "embodies the worst sort of pay-to-play politics that progressives are trying to rid from our party."

De Leon has never run statewide, so it's not clear what kind of coalition he could form behind him. Feinstein has traditionally run strongly with key Democratic voter groups, especially women.

California has an open primary system, meaning all candidates run on a single ballot. The top two vote-getters advance, regardless of party. So far, no major Republican candidate has entered the race.

"The past is not much of a guide here because no one has ever challenged Dianne from the left," noted Democratic consultant Roy Behr, whose clients have included former California Sen. Barbara Boxer.

Even if De Leon cornered the vote from liberal activists, it wouldn't be enough for a majority, Behr said. In a runoff, Feinstein would be the favorite with the state's large group of independent voters, as well as Republicans, to add to her base, he said.

De Leon "has a very steep uphill climb," Behr said. "It's hard to see where he makes his move."

In the Senate, where seniority comes with clout, De Leon is asking voters to retire a senator who sits on several of the most powerful committees on Capitol Hill for a potential freshman who could also be in the minority party, unless Democrats retake control of the chamber. That would almost certainly mean diminished influence for the state.

"What's he going to do that she's not doing?" asked Bill Carrick, Feinstein's longtime political strategist.

De Leon will make a formal public announcement Wednesday in Los Angeles. He was elected to the state Senate in 2010 and became its president pro tem, the top leadership position, in 2014. De Leon previously served in the California Assembly.