Kobe Bryant Boulevard: Part of Figueroa St outside Staples Center to be renamed after Lakers legend

As Los Angeles and Orange counties celebrated Kobe Bryant Day on Monday, L.A. officials announced their intentions to dedicate another part of the city to the Lakers legend.
KABC
By Sid Garcia 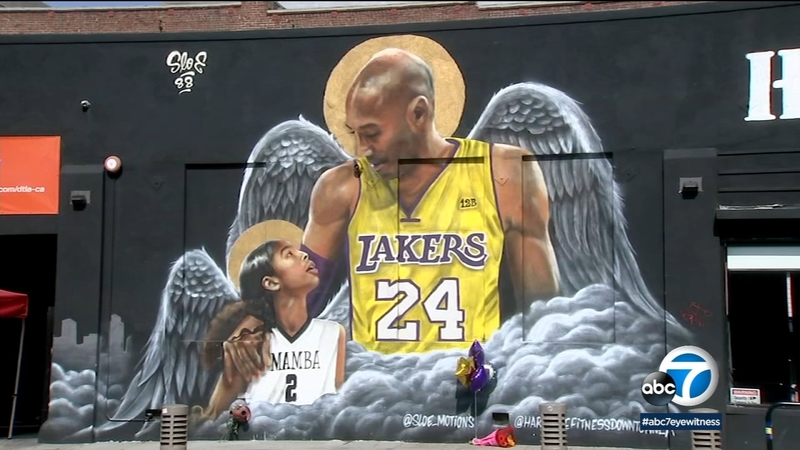 Street outside Staples Center to be renamed after Kobe Bryant

LOS ANGELES (KABC) -- In the months following the death of Kobe Bryant, countless tributes and memorials in his memory have popped up across Southern California.

As Los Angeles and Orange counties celebrated Kobe Bryant Day on Monday, L.A. officials announced their intentions to dedicate another part of the city to the Lakers legend.

"So when we drive down this stretch, we will forever be able to look up to Kobe Bryant Boulevard and feel him smiling down on us and the ever-lasting impact his life has had and will continue to have for generations to come," L.A. City Councilman Curren Price said outside the arena, often referred to as "The House that Kobe Built."

Fans who were there for the announcement thought the renaming of the stretch of street was fitting for Bryant's legacy in the city.

"It sounds beautiful. I mean, he is the city. The impact that he's had on this city since Day 1....it's remarkable," said Stephen Armstrong.

If the Los Angeles Lakers win the NBA title this year, the L.A. City Council is hoping to have it renamed just in time for a championship parade.

Championship parade after championship parade, Kobe Bryant led the procession down Figueroa St, from MLK to Olympic. After the @Lakers win this year, they will be marching down #KobeBryantBlvd.

The Lakers wore special-edition city jerseys with a patch featuring a heart and #2 -- in remembrance of Bryant's daughter, Gianna, who was also killed in the helicopter crash in January -- on Monday in their dominating win over the Portland Trail Blazers. Monday also marked 8/24, designated as Kobe Bryant Day in Los Angeles and Orange counties.

During a postgame interview, LeBron James talked about Bryant's importance to the team.

"Tonight was one of those moments, for myself and this organization and all the players that were able to wear those uniforms that were inspired by him," James said. "One day removed from his birthday. And his day of 8/24, to have a game on this day, the stars aligned. It was a beautiful night for our franchise."

On Sunday, Vanessa Bryant shared a touching post on Instagram for what would've been Bryant's 42nd birthday. In the post, she opened up about the pain of losing her husband and their 13-year-old Gianna, saying she's "been completely broken inside."

He was a hero to so many people. Many paid tribute on Sunday to Kobe Bryant on what would have been his 42nd birthday, the most touching tribute coming from his wife.