Monday is Kobe Bryant Day in Los Angeles and Orange counties, and fans are honoring the late Lakers star across the Southland.
KABC
By Alex Cheney 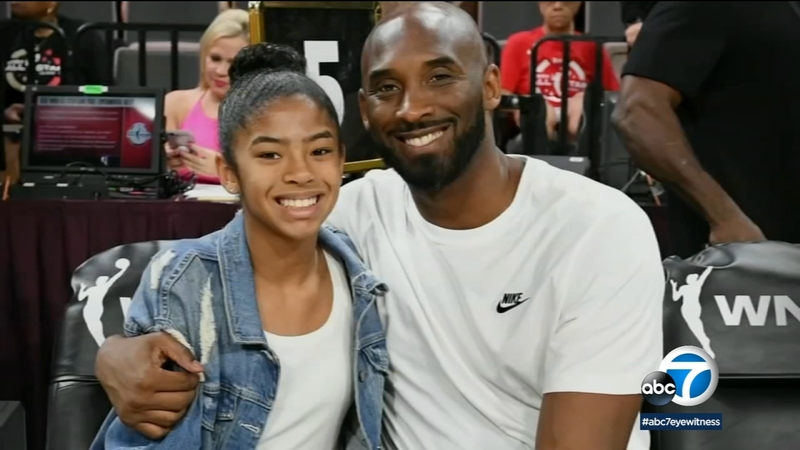 LOS ANGELES (KABC) -- Monday is Kobe Bryant Day in Los Angeles and Orange counties, and fans are honoring the late Lakers star across the Southland.

A 2016 Los Angeles City Council resolution declared Aug. 24 as Kobe Bryant Day in perpetuity, on the date of the jersey numbers he wore with the team.

City Councilman Jose Huizar, who introduced the resolution, said Bryant should be admired not just because he was "unbelievably talented,'' but because he "has taught all of us in Los Angeles that this city has a fighting spirit.''

Fans who live in Las Vegas drove to L.A. to celebrate the day.

"All of his hard work that he put in on and off the court just to be remembered worldwide, nationwide," said Deanna Daniels. "Just all of his hard work to where one day to be like, Kobe, you did this. This is for you. Let's stop and acknowledge who you are and what you put in."

The Orange County Board of Supervisors voted Aug. 11 to declare Aug. 24 as Kobe Bryant Day. Bryant was a resident of Newport Beach.

Board of Supervisors Chairwoman Michelle Steel, who introduced the motion, called Bryant a "treasured member of our community,'' who "inspired so many men and women to pursue their dreams and never give up.''

An enormous, colorful mural of Kobe and Gianna Bryant has been erected in Santa Ana. The artwork includes a mantra that the Lakers legend quoted from one of his high school English teachers: "Rest at the end, not in the middle."

"After the tragedy, which is kind of a blur, still honestly that week. I remember seeing all of the murals going up throughout L.A., and Orange County and the world, and figured somebody should organize this," Asner said.

On Sunday, Vanessa Bryant posted a photo on Instagram wishing her late husband a happy 42nd birthday and opening up about the pain of losing Kobe and their 13-year-old daughter Gianna, saying she's "been completely broken inside."

LeBron James posted a touching tribute online showing him singing to Kobe on his then-30th birthday, with Kobe holding Gianna in his arm.

The Los Angeles Dodgers also honored the memories of Kobe and Gianna Bryant.

During ceremonies before the 11-3 victory over the Colorado Rockies, Dodger players donned Kobe Bryant's Nos. 8 and 24 jerseys and the team played a tribute video narrated by retired broadcaster Vin Scully.

"Kobe demonstrated that he was a man of many talents,'' Scully said. "He was a champion, a mentor, a creative force, an advocate."

"Kobe was also a husband and a father to four wonderful girls. The warrior that we knew as 'The Black Mamba' was a sweetheart to his wife Vanessa and a proud Girl Dad' to Natalia, Bianka, Capri and his daughter known as 'the Mambacita,' Gianna.

"Gigi was worthy of her dad's nickname. She shared his passion for basketball and so much more. He in turn wanted her to have every opportunity to succeed, and he believed that the women's game deserved as much respect and support as the men received.''

Kobe Bryant's No. 24 and Gianna's youth basketball No. 2 were painted on the pitcher's mound.

James passed Bryant on the all-time list Jan. 25, one day before Kobe, Gianna and seven others were killed in a Jan. 26 helicopter crash in Calabasas.

RELATED: Kobe Bryant, all others aboard helicopter died immediately in crash, autopsies show