The artists worked with the Philadelphia Mural Arts and other organizations to make the mural come to life.
KABC 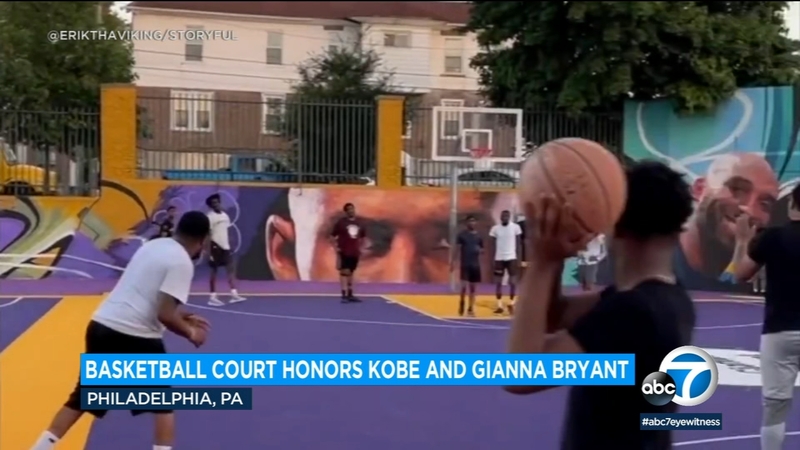 PHILADELPHIA (KABC) -- A new mural paying homage to the late Kobe Bryant and his daughter was unveiled Wednesday in Philadelphia's Overbrook section.

"Literally, I've never done this much in a week and a half. Usually, this would take a month or two. We did it in a week, and remember when it rains we have to cancel because you paint in the rain," said artist Taqiy Muhammad.

Muhammad and Gabe Tiberino are two of the artists who created the mural and transformed the Tustin Recreation Center.

The mural spans the entire perimeter of the basketball court, and at half court, a circle bares both Kobe and Gianna's names with a Lakers-style purple and yellow color scheme.

A Kobe Bryant game-worn jersey from 1997 fetched $2.735 million at auction over the weekend.

According to posts by Vanessa Bryant on social media, she and other family members were in town to attend the opening of two new basketball courts their names.

"(It) was amazing for them to come out, and they really loved it," said Tiberino.

The artists worked with the Philadelphia Mural Arts and other organizations to make the mural come to life.

Bryant was killed on Jan. 26, 2020, in a California helicopter crash that also took the lives of his 13-year-old daughter Gianna and seven others.