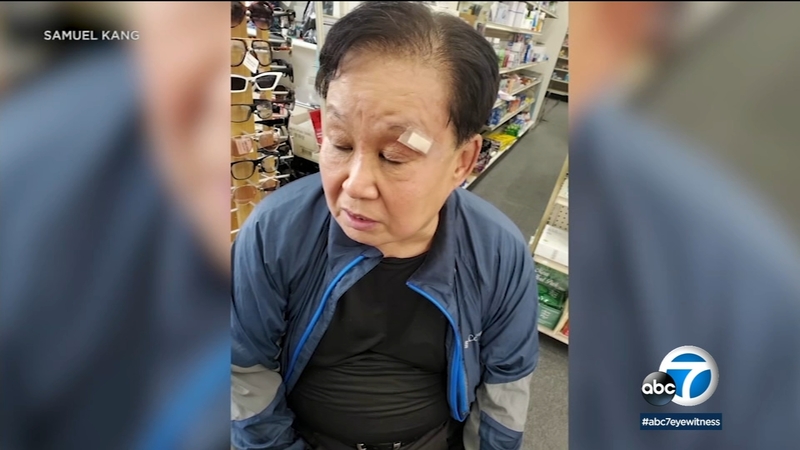 KOREATOWN, LOS ANGELES (KABC) -- A 70-year-old Asian American man who was violently attacked in Koreatown is afraid his assailant could target him again after the suspect was released just hours after the assault. The victim even spotted the man in the same area a few days later.

Samuel Kang says he was waiting for a bus at the corner of 5th Street and Western Avenue on Sept. 20 when the suspect walked by, turned around and started the attack. The attack left him with bruises on his forehead.

The incident comes amid a sharp rise in attacks on Asian Americans that have been reported during the pandemic.

Kang, speaking exclusively with Eyewitness News, was in tears as he spoke about his love for America. He has a little difficulty speaking English, but he has no difficulty remembering what the attacker yelled at him.

"Without being prepared he started assaulting me when I was wearing my glasses, which caused me to have a rip because the lens of my glasses fell out and scratched my eyebrow," Kang said through a translator, describing the attack.

Kang said as he was being assaulted, he ran away and fortunately, there was an officer patrolling the area.

The suspect was arrested a block away for misdemeanor battery. According to court records, Cartrell Smith was released just hours later on his own recognizance.

Kang says he saw him in the same location a few days after the incident. He now feels scared.

"I was just distraught and flabbergasted. I want the justice system to do its work better than before and how I was treated," Kang said.

"A crime did occur, and there are a lot of questions that surround this, including why was this perpetrator released so quickly? What's the progress of the case?" said Steve Ly with the group Asian American Civil Liberties and Anti-Defamation.

There have been a number of attacks on Asian Americans over the last year and a half.

"Due to the language barrier that some of these immigrants face a lot of them have not been able to go forth to proper law enforcement, to LAPD even, to make these reports," said James An, the president of the Korean American Federation of Los Angeles.