The Los Angeles County Sheriff's Department's claims that a journalist who was arrested for allegedly obstructing justice during a protest contradict video captured at the scene in Lynwood.
KABC 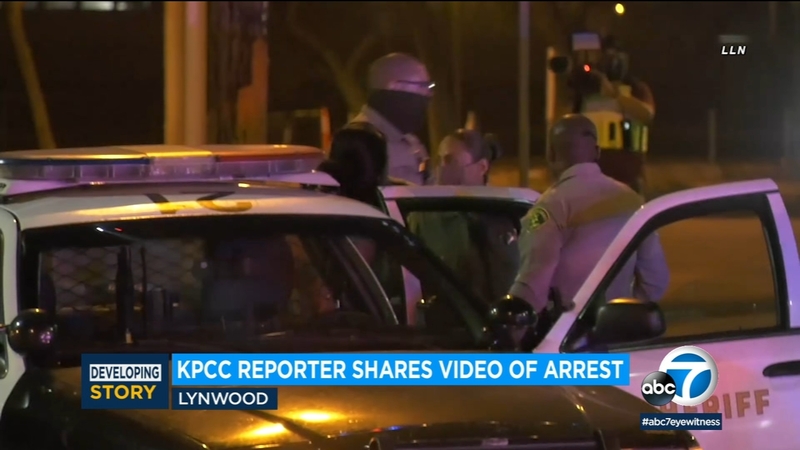 LYNWOOD, Calif. (KABC) -- The Los Angeles County Sheriff's Department's claims that a journalist who was arrested for allegedly obstructing justice during a protest contradict video captured at the scene in Lynwood.

In the video, deputies appeared to violently tackle and arrest KPCC/LAist reporter Josie Huang, who was covering a Saturday night press conference at St. Francis Medical Center on the ambush-style shooting.

The sheriff's department tweeted that Huang ignored commands to stay back as deputies attempted to arrest someone. But Huang disputes that claim.

Two L.A. County Sheriff's Department deputies who were shot in an ambush in Compton are now in stable condition, the agency said.

"'I was filming an arrest when suddenly deputies shout 'back up.' Within seconds, I was getting shoved around. There was nowhere to back up,'" Huang wrote in a series of videos on Twitter recounting the incident.

Authorities said she did not identify herself as press. However, video captured by Huang seems to contradict that as she can be heard yelling, "I'm a reporter. I'm with KPCC."

Video taken by ABC7 shows at least five deputies pinning her to the ground before placing her in a patrol car.

WATCH: Protesters show up to hospital after Compton deputy shooting

One video showed two deputies appearing to damage her phone by kicking and stepping on it while Huang shouts in the background, "You guys are hurting me."

KPCC reports that Huang was taken to the women's jail at the Century Regional Detention Center and was later released without bail. According to a KPCC newsroom executive, Huang had "visible bruises and scrapes, a sore shoulder and a blackened eye."

In a statement, KPCC said the obstruction charge against her should be dropped.

"Her arrest is the latest in a series of troubling interactions between our reporters and some local law enforcement officers. Journalists provide an essential service, providing fair, accurate and timely journalism and without them, our democracy is at risk."

The captain of the sheriff's department's Century Station tweeted that they are investigating the incident but wouldn't comment further.

The incident follows the shooting of two deputies in Compton Saturday. A senior official within the department tells ABC News that one of the deputies, only identified as a 31-year-old mother of a 6-year-old boy, was shot in the jaw and arms, but is currently in critical but stable condition.

The other deputy, a 24-year-old man, was struck by gunfire in the forehead, an arm and a hand. He is described as alert. Neither of their names have been released to the public. Both deputies were sworn in 14 months ago.