Kylie Jenner is 'broken and devastated' over Astroworld Fest disaster Kylie Jenner is 'broken and devastated' over Astroworld Fest disaster

Jenner released the following statement on Instagram after learning at least eight people died and hundreds of other concert goers were injured at NRG Park.

"Travis and I are broken and devastated. My thoughts and prayers are with all wo lost their lives, were injured or affected in any way by yesterday's events. Also for Travis, who I know cares deeply for his fans and the Houston community. I want to make it clear we weren't aware of any fatalities until the news came out after the show and in no world would we have continued filming or performing. I am sending my deepest condolences to all the families during this difficult time and will be praying for the healing of everyone who has been impacted." 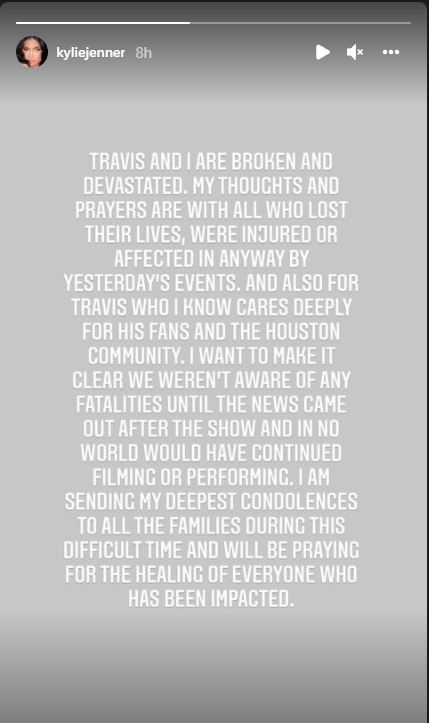 The 24-year-old model is also the owner of Kylie Cosmetics. She is pregnant with Scott's second child.

Her statement comes after Scott spoke out on Twitter Saturday.

"I'm absolutely devastated by what took place last night. My prayers go out to the families and all those impacted by what happened at Astroworld Festival. Houston PD has my total support as they continue to look into the tragic loss of life. I am committed to working together with the Houston community to heal and support the families in need. Thank you to Houston PD, Fire Department and NRG Park for their immediate response and support. Love you all."

Scott also released a series of short videos on Instagram.

The artist talked about his efforts to help the families of the victims from Friday's tragedy where eight people died and 25 were takento hospitals. He said he's devastated by what happened.

By Saturday afternoon, 13 of 25 victims who were transported to hospitals remained under doctors' care, Houston city leaders said. Five of those patients were under 18 years old.

It wasn't yet clear what caused the deaths or injuries.

Support for victims of Astroworld tragedy pours in

Timeline: A look at some of the world's major crowd disasters