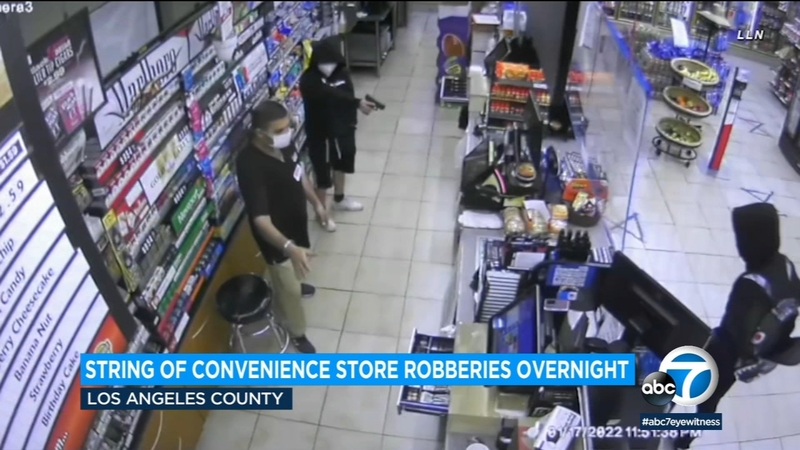 The first robbery happened on Jan. 17 at about 9:11 p.m. on the 5800 block of Bellflower Boulevard in Lakewood. Deputies responded to the convenience store after a silent alarm was tripped, and learned that one of two men, between 20-25 years old, took out a gun and demanded money before leaving with two cash registers, investigators said.

Shortly after 11:30 p.m., an attempted robbery occurred at a convenience store located in the 8500 block of Alondra Boulevard in Paramount, officials said. Two of the three male suspects in this case had a similar description as the two men in the Lakewood robbery, said authorities.

One of the men pointed a silver gun at the cashier while demanding money as the other two suspects stood by the front door of the business, according to investigators. No money was taken after the attempted robbery was interrupted as customers walked into the store. Officials say the three men ran eastbound on Alondra Boulevard.

About 15 minutes later, a robbery occurred at a convenience store in the 17200 block of Downey Avenue in Bellflower. Three suspected robbers walked away with an undisclosed amount of money, got into an older white Mercedes-Benz, and drove away, taking the westbound 91 Freeway on-ramp, authorities said.

Investigators believe the robberies in Lakewood, Paramount, and Bellflower are connected.

The sheriff's department says they were contacted by the Long Beach Police Department to let them know about other robberies in their area with similar suspect descriptions. Investigators are working to determine if the suspects are the same individuals.