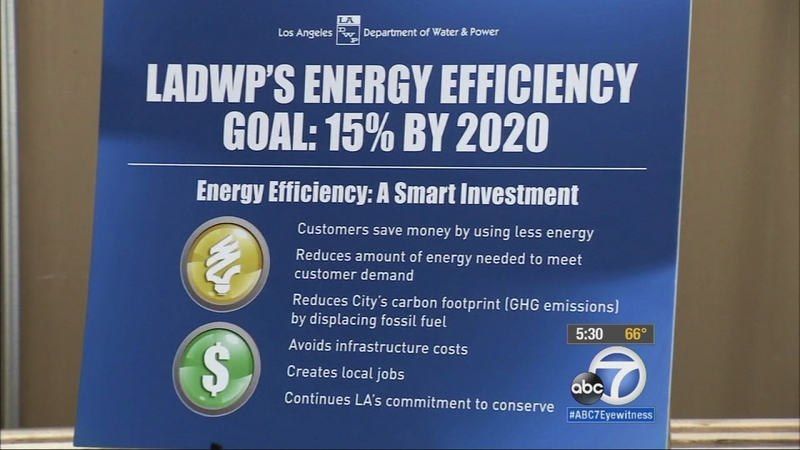 LOS ANGELES (KABC) -- Los Angeles Mayor Eric Garcetti detailed a new plan Monday aimed at dramatically increasing efficiency at the L.A. Department of Water and Power. But will it translate into savings for customers?

It's said to be the most ambitious goal set by a major municipal department in the country, and Los Angeles plans to lead the way.

The DWP does not want to build any new power plants, which would cost millions of dollars. That's why it wants residents and businesses to become more energy-efficient and reduce energy demand by about 15 percent by 2020.

It's part of the LADWP's plan to help consumers and businesses use less electricity and meet a new 15-percent energy-efficiency goal by 2020.

By saving energy the DWP would import less power from out-of-state plants. To encourage changes, there are rebates for installing energy-efficient lighting and appliances.

But the big change needs to come from the big power users.

"Did you know that half of the electricity demand in Los Angeles comes from just 4 percent of our buildings?" said L.A. City Councilman Jose Huizar. "If we can tailor programs to support conservation at these major users, we can achieve big results."

Those major users include many office buildings in downtown Los Angeles.

The BLOC, a multi-use building at 7th and Flower in downtown L.A., is undergoing a $180-million renovation. There are department stores, including Macy's, and offices in the building. Officials say it will soon be one of the most energy-efficient buildings in Los Angeles.

The building is only about 40 years old, but officials say the new building techniques are so energy-efficient that it's really cost-effective to re-do just about everything.

"We are talking about complete new systems for the building: That's heating, ventilating, air-conditioning, all elevators are going to be re-done, the massive amount of electrical saving, and even a substantial amount of water saving," said Wayne Ratkovich, The BLOC. "Depending on which system you are talking about, it's in the hundreds of thousands of dollars a year."

As officials urge people to reduce energy consumption, the DWP is looking at the possibility of raising power rates in the future.