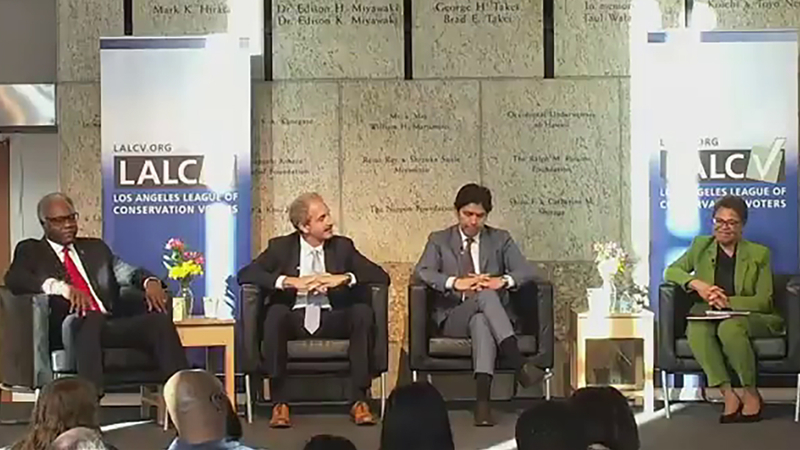 The Los Angeles League of Conservation Voters, which hosted the debate, will endorse one of the candidates who participated. The event was moderated by ABC7's Josh Haskell.

Here's what the candidates had to say about how they would address a less-secure water future.

"We've gotta clean up our aquifers," said Los Angeles City Attorney Mike Feuer. "Even as city attorney, I've been active in doing that. Especially in the San Fernando Valley. Fundamental for us to do that."

"Second, important for us to recycle our water. Other jurisdictions have done it. Orange County has done it. There are some who advocate for desalinization. It's too expensive, energy intensive, has environmental consequence, shouldn't do it. Recycling instead,"

"If we want to be the city of the future, we can no longer rely on snowpacks in the sierras as well as Shasta," de Leon said. "Having that water travel down 400 miles to Los Angeles is not conceivable with the extreme weather patterns and the drought."

Businessman Mel Wilson said: "Why not have permeable hard surfaces, sidewalks, roadways, where the water percolates into the groundwater table and we can reuse that water. Why not reclaim water at a much higher rate. Why not help Angelenos who don't have the funds, who live in poorer communities, to recycle."

Transportation is the largest contributor to greenhouse gas emissions in the United States. Here's what the candidates said about what they would do to improve public transportation while encouraging more environmentally friendly ways to get around.

"We need to get people out of their cars," Bass said. "We need to improve the ability for people to ride bikes. We need to have protected bike lanes because as a bike rider, frankly, I ride on the beach because it's too dangerous to ride in traffic."

"A public transportation system only for the poor is not sustainable over the course of time," de Leon said. "You have to change behaviors and get middle-class folks with high educational attainment and upper middle class folks to get out of their cars and utilize transportation."

"Gas prices are at $5 a gallon or more, but people are not rushing to public transit. Why is that? Because it's not safe," said Wilson.

Communities of color have significantly less access to parks. Here's what the candidates would do to fix that.

"I've already secured $27 million in my district alone for the creation of new parks so our children - regardless of the color of their skin, regardless of their legal status or what god they pray to or who they love - can have green grass grow under their feet," said de Leon.

"We need to make sure there's green open space in all communities, not just the affluent communities," said Wilson.

"I'm going to work closely with LAUSD to expand the availability and quality of green spaces on school campuses because we're not going to create more open space in the most densely populated areas of our city," said Feuer.

"That beautiful South Park that I grew up with for a while became quite dangerous so we have to look at combining public safety issues along with parks," said Bass.

On the topic of environmental justice, here's what the candidates said about how where someone lives shouldn't determine how long they live.

"LA has the dirtiest air in the nation and it's killing our people and destroying our planet. It requires leadership and someone with experience of bringing people together," said Wilson.

"De-carbonizing our grid. In other words, we have to modernize it, electrify it. Tree canopy. Planting trees," said de Leon.

"Who lives near those freeways? What's impacted by those freeways. I know the leading cause of death for a while of young Black babies was (being) near freeways. Addressing environmental justice means paying attention in a proactive manner," said Bass.