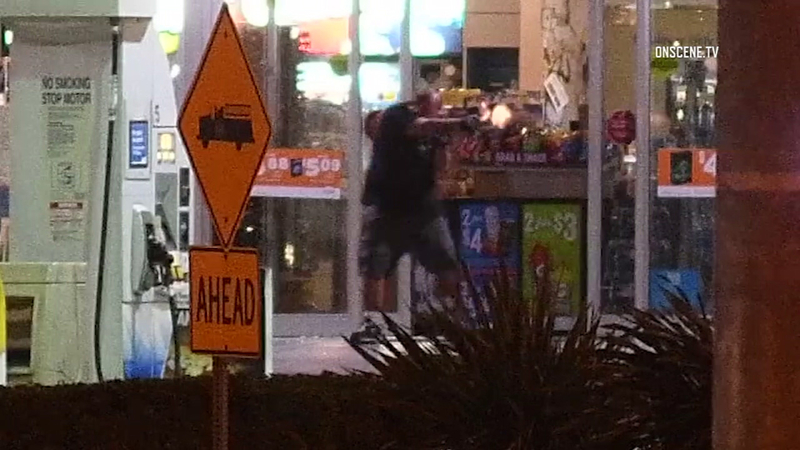 LA MIRADA, Calif. (KABC) -- A man was killed in a deputy-involved shooting early Tuesday morning after he exited a convenience store in La Mirada and opened fire at a SWAT team, authorities said.

The shoot-out came after a standoff that began at about 9:15 p.m. Monday when deputies responded to a call of a robbery at an AM/PM at Beach Boulevard and Hillsborough Drive, according to the Los Angeles County Sheriff's Department.

No customers or employees were inside the store when the suspect barricaded himself inside, a sheriff's department spokesperson said. He had arrived on a bicycle and allegedly attempted to rob the business.

But customers were at the scene and said they were lucky to be alive during the tense situation. Sabrina Garcia was at the gas station with her 2-year-old son when a clerk ran up to a window, frantically telling her to call 911.

"The guy came out with his gun and he walked toward my car. He was telling us don't call the cops," she said.

She pulled her SUV away from the station and called for help, even warning customers to stay away, but some still came face-to-face with the gunman.

Witnesses said the suspect's family came to the scene and said he was mentally challenged and suffered from schizophrenia.

The agency's Special Enforcement Bureau was summoned to the scene, along with a crisis negotiation team. At some point, the man fired a single round at deputies while he was inside the AM/PM, authorities said.

The standoff continued until about 12:25 a.m. when the suspect walked out of the store and fired another round. Deputies, who had approached the front of the building alongside an armored vehicle, returned fire.

"Our suspect was struck at least once and he went down in front of the location," sheriff's Lt. Steve Jauch said. "We had paramedics already established on scene. They rendered first aid but unfortunately the man died as a result of the injuries on scene."

He was pronounced dead at the scene and a handgun was recovered. The suspect's identity was not immediately released.