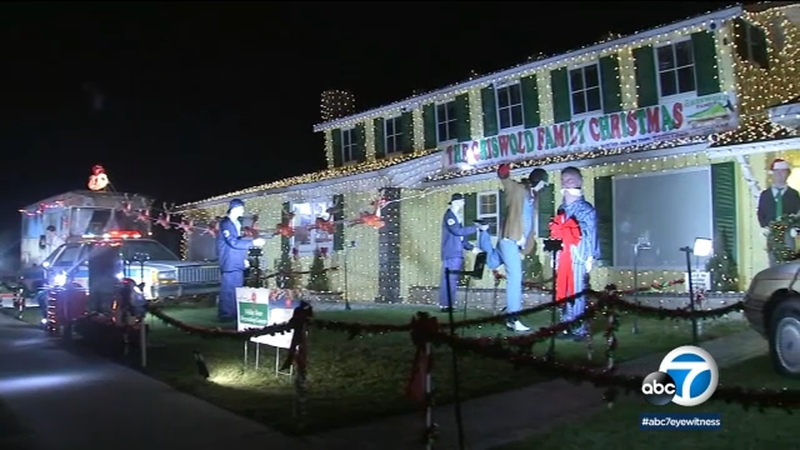 LA MIRADA, Calif. (KABC) -- A La Mirada homeowner known for his holiday decorations based off the movie "National Lampoon's Christmas Vacation" may soon be fined by the city if he doesn't remove the latest addition to his display.

This is the fourth year the 1989 holiday classic has taken over Jeff Norton's front yard.

"You know, as a kid, we loved this movie. We really gravitated with it as a family and it just kind of grew on us. And then I had that fantasy to just really build into it and got out one day and just started putting lights on the house and one thing led to another," Norton said.

Every year, Norton's street closes down. He says he welcomes hundreds from across the nation nightly to walk up to the scene. Every year, he adds more to the elaborate holiday display.

"From the motorhome to the police scene to the Ford Taurus with the tree," Norton said.

It takes countless hours of online shopping, weeks of labor, and even painting his house permanently to get it just right.

"I had to have that ugly yellow with the ugly green shutters - the whole deal," he added.

But this year's addition, a fake second story on top of his house, is not sitting well with the City of La Mirada. They want that part taken down.

"I said there's no way in this world I would remove that until January 1st. It is a makeshift, fake facade that I put up on my roof," Norton said.

The City Manager tells Eyewitness News they encourage Norton's Christmas spirit. He has even been the winner of the Holiday Home Decorating Program Award in the past, but Norton built the new section without permits and city staff said they don't want it flying off with a strong wind or accidentally hurting someone.

If Norton doesn't comply, citations will come, starting at $100 and working their way up weekly.

"I will more than happily pay that fine. I'm not necessarily happy, but I'll do that to keep this up for the whole entire community. I'm not gonna take this down - no ifs, ands or buts," Norton said.

The city manager said Norton has until the end of this weekend to take down the fake second story of his display before warnings start to kick in.