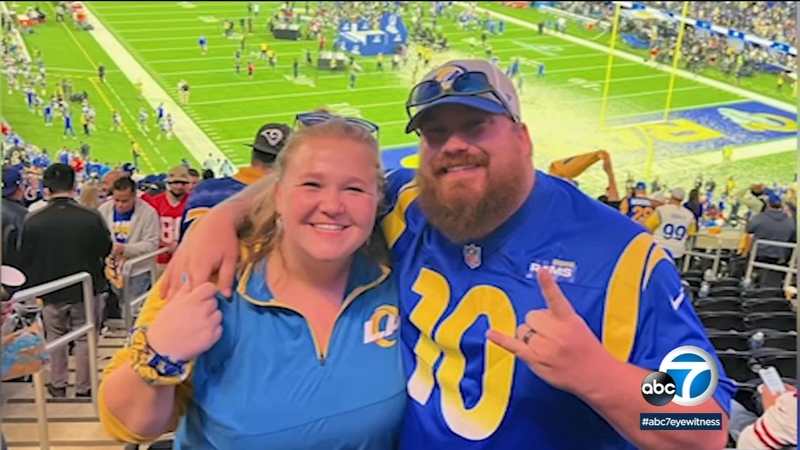 LOS ANGELES (KABC) -- If Rams super fans had a competition, Alexandra and Scott Hamm would dominate.

The two Rams fans will be cheering for their favorite team from thousands of miles away Sunday when Los Angeles plays the Cincinnati Bengals in Super Bowl LVI at SoFi Stadium.

Although they won't see the big showdown in person, the two were at SoFi Stadium to see the Rams be crowned NFC champions after reaching out to Kelly Stafford, wife of Rams quarterback Matthew Stafford.

The couple lives 2,000 miles away in Chicago.

Being die-hard fans, they got engaged at the 2019 Super Bowl when the Rams played the New England Patriots.

They said their "I dos" rocking Rams jerseys, and their baby girl came home from the hospital dressed in blue and yellow.

Two Sundays ago, the Hamms won the trip of a lifetime to watch their favorite team face off in the NFC Championship against the San Francisco 49ers.

Prior to the game, Kelly Stafford posted a ticket giveaway on Instagram - promising a handful of tickets to hardcore Rams fans who emailed their story.

"Within 24 hours she emailed back," Alexandra said.

In addition to their love for the Rams, Alexandra works as a registered nurse and Scott is an Army veteran.

"You have two tickets on one condition: you cheer loud," Alexandra recalls Kelly telling them. "And I promise you we did. We couldn't talk the next day."

The couple touched down in sunny Southern California for the first time and into SoFi Stadium they went.

"I still have a hard time believing it," Alexandra said.

This Sunday they'll be watching the Rams from home, without a doubt that they'll come out on top.