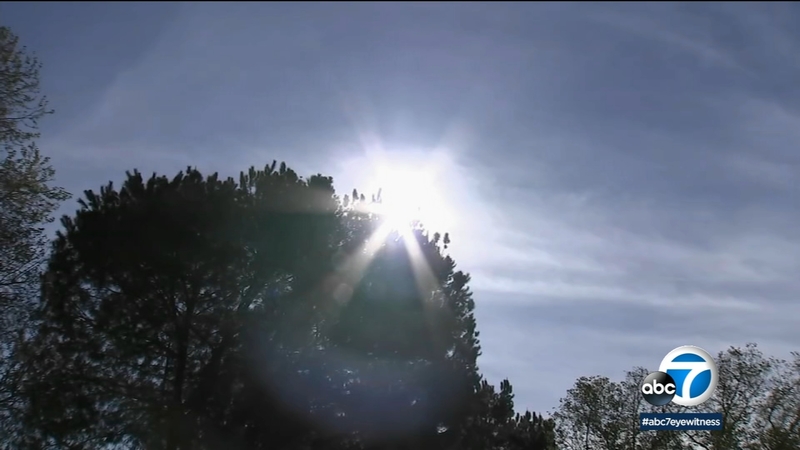 LOS ANGELES (KABC) -- Several Southland communities broke or tied heat records for the date on Thursday, as the region emerges from a relatively mild winter and heads into a growing drought.

The temperature at Los Angeles International Airport hit 85 on Thursday, according to the National Weather Service, breaking the date's previous record of 83 set in 1980.

Long Beach broke its record with a high of 84, while the 83 degrees measured at UCLA tied a previous record.

Downtown Los Angeles (86) and Camarillo (87) and Paso Robles (79) tied their previous records for the date.

The recent above-average temperatures resulted from a ridge of high pressure aloft combined with Santa Ana winds, which are now coming to an end.

The drought has now spread to about a quarter of the state, while 70% of the state is considered at least abnormally dry.

The record temperatures were reached despite a high cloud cover over some parts of the region. A cooldown is expected in time for the weekend, with temperatures dropping to the 70s on Saturday and 60s by Sunday, with a chance of light showers at night. Even some light snow is expected in the mountains.

"With the diminished rainfall that we've seen here throughout the winter, it greatly affects the probability of ignition, rapid rate of spread that we see later in the fall months," Los Angeles County Fire Capt. Tony Imbrenda said. "We're expecting to see fuel moistures that are typical of August and September in April and May. It definitely concerns us and we're ramped up for brush season right now - it's almost a year-round endeavor for us these days."
Imbrenda added that the department is already preparing for the possibility of an early fire season.

"When we start seeing fuel moistures that are typical of the fall that are occurring in the spring, you start seeing the tempo around the department start to raise up, the augmented staffing, we start re-positioning resources in areas of high fire growth. That's really what drives us, it's the weather," Imbrenda said.

Warm temperatures during Southland winters are not unheard of, according to National Weather Service meteorologist Dave Bruno. However, how quickly the weather will turn is a little unusual, he added, noting that Sunday's highs, amid rain, will be up to 24 degrees lower. At the same time, the snow level could drop to around 3,000 feet Sunday, he said.

The impending storm is now in the gulf of Alaska, Bruno said. It will make its way to southwestern Canada Friday night, then drop down the coast, striking Southern California Sunday.