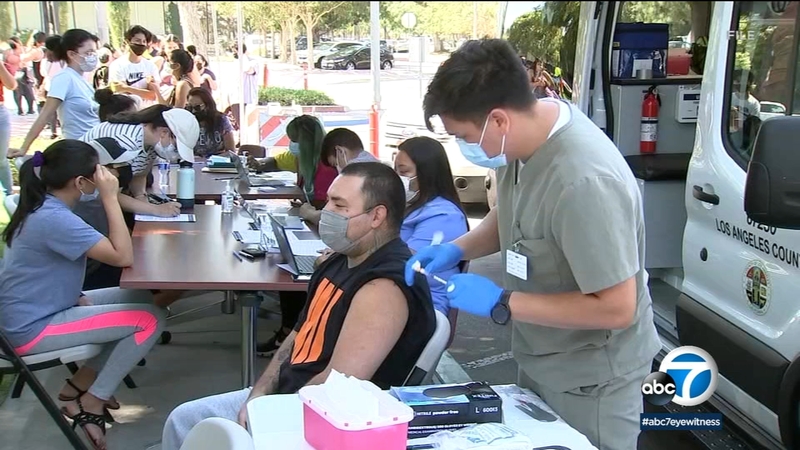 LOS ANGELES (KABC) -- Proof of at least partial vaccination against COVID-19 would be required to enter public indoor spaces in the city of Los Angeles under a proposal introduced Wednesday by City Council President Nury Martinez.

"Enough is enough already,'' Martinez, who co-introduced the motion with Councilman Mitch O'Farrell, said in a statement. "Hospital workers are exhausted, moms who have put aside their careers are tired, and our kids cannot afford the loss of another school year. We have three vaccines that work and are readily available, so what's it going to take?''

The proposal is similar to a policy announced this week in New York City, but it would be more restrictive with the inclusion of retail establishments, potentially limiting access to some basic necessities. The New York policy restricts access only to more entertainment-oriented venues such as indoor restaurants, fitness centers and theaters.

According to O'Farrell's office, the exact businesses that would fall under the restrictions would be determined during the drafting of the ordinance by city attorneys. No determination has yet been made on whether such retail restrictions would extend to grocery stores.

Will Angelenos soon need to show proof of vaccination to enter restaurants, gyms and theaters? That's what some local officials are pushing for.

"Hard-working Angelenos, their customers, and the general public deserve to be safe in public spaces," O'Farrell said in a statement. "The vaccines are our most effective form of protection, and the time to act is now."

L.A. City Attorney Mike Feuer says it's a privilege -- not a right -- to enter a number of businesses, and that's why he too wants the city of L.A. to require proof of vaccination for customers who enter such establishments.

Bars and restaurant owners in Los Angeles are taking matters into their own hands by requiring customers show proof of COVID-19 vaccination for entry.

Feuer says residents who have gotten vaccinated acted responsibly, and they shouldn't have to worry about getting infected when they go inside establishments.

"Going to places like a restaurant or a bar - those are not necessities of life. Those are privileges. And those privileges should be afforded to people who've taken that public health advice seriously," Feuer said.

Meanwhile, the L.A. County Board of Supervisors says it's committed to slowing the spread of the virus -- and is considering all options.

Mayor Eric Garcetti's office said that with COVID cases and hospitalizations rising, nothing is off of the table.

L.A. County Supervisors Janice Hahn and Sheila Kuehl will ask their colleagues next week to approve a policy requiring all 100,000 county employees to either be vaccinated against COVID-19 or undergo weekly testing.

Some local businesses have already made proof of vaccination a requirement to enter their doors.

Last week, the city of L.A. announced it is requiring all city workers to get vaccinated or undergo weekly COVID testing. Next week, the county of L.A. will decide whether or not to implement the same requirement for its 100,000 workers.