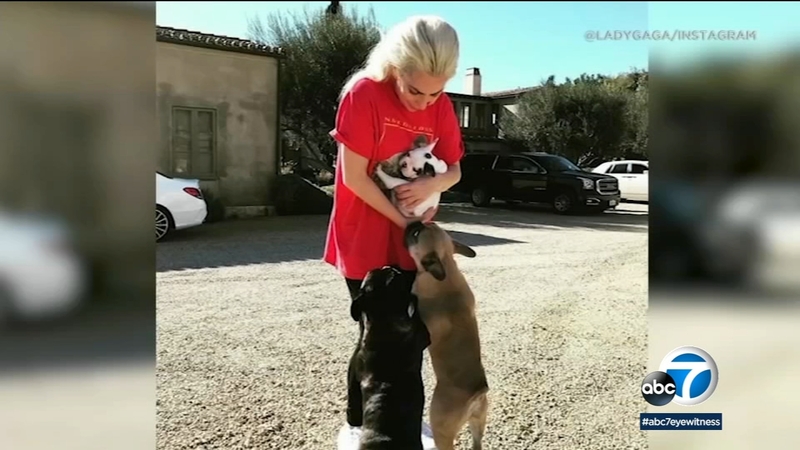 HOLLYWOOD, LOS ANGELES (KABC) -- Five people have been arrested in connection with the Feb. 24 theft of Lady Gaga's French bulldogs in Hollywood, a violent incident in which the pop singer's dog walker was shot and wounded, authorities said Thursday.

The suspects were taken into custody after multiple search and arrest warrants were served Tuesday in connection with the investigation, the Los Angeles Police Department confirmed.

They were identified as: James Jackson, 18, Jaylin White, 19, Lafayette Whaley, 27, Harold White, 40, and Jennifer McBride, 50, the LAPD said in a news release.

Jackson, Jaylin White, and Whaley "were involved in the robbery and shooting of the victim," the police statement said.

"Detectives do not believe the suspects were targeting the victim because of the dogs' owner," according to the LAPD. "However, evidence suggests the suspects knew the great value of the breed of dogs and was the motivation for the robbery."

Investigators identified McBride as the woman who brought the dogs to the LAPD's Olympic Community Police Station, around 6 p.m. two days after they were taken.

The Los Angeles County District Attorney's Office later announced charges had been filed in the case and an arraignment was expected Thursday afternoon.

"This was a brazen street crime that left a man seriously wounded," District Attorney George Gascón said. "We have alleged very serious charges in this case and have faith that justice will be appropriately served as this case unfolds in court."

The defendants appeared in court late Thursday afternoon and all entered not guilty pleas, with their next court appearance scheduled for May 11. Bail was ordered at $3 million for Jackson, $1 million for Jaylin White, $1.1 million for Whaley and $35,000 for Harold White. McBride was released on her own recognizance with a requirement for ankle monitoring.

In February, the LAPD said the identity and the location where the dogs were found would not be disclosed for the woman's safety and because of the ongoing investigation.

"Detectives were able to establish McBride had a relationship with the father of one of the suspects, Harold White," police said in Thursday's news release.

The dog walker, Ryan Fischer, was walking the singer's three French bulldogs when the shooting and theft happened around 9:40 p.m. on Feb. 24 in the 1500 block of North Sierra Bonita Avenue, according to authorities.

Lady Gaga herself was in Rome to film a movie at the time of the dognapping.

Fischer survived the shooting and the dogs were recovered unharmed after the singer offered a $500,000 reward in the case, no questions asked.