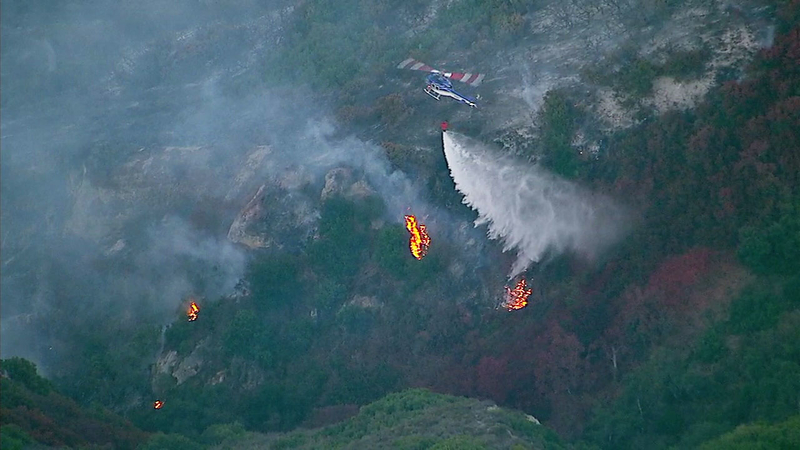 What was first reported as a 25-acre brush fire spread to at least 200 acres. Fire officials at one point stated the acreage was at 250 but later downgraded that number. Containment was at 0 percent, according to Laguna Beach fire and police officials.

The so-called Aliso Fire broke out about 1 p.m. along a trail in the Aliso Woods Canyon, located near Aliso Viejo's Soka University of America, according to the Orange County Fire Authority.

There were no reports of injuries or structural damage.

Eight fire strike teams, six air tankers and four helicopters were used in the firefight and some will continue to work throughout the night, Laguna Beach police said. On the ground, bulldozers cut a line near hilltop homes to stop the flames from racing up a ridge.

By 7 p.m. OCFA officials said firefighters had the upper hand while winds began to diminish.

About 2,000 residents at one point were impacted by the fire and homes were threatened in Laguna Beach and Aliso Viejo, officials said. Evacuation orders in Aliso Viejo were lifted at 9 p.m., according to the OCFA.

All evacuations were expected to remain in place in Laguna Beach neighborhoods through Sunday morning, Laguna Beach police said.

Aliso Fire: Firefighters continue to make good progress with little to no wind. Crews will remain throughout the night and day tomorrow working on remaining hotspots and securing a line around the fire. Fire still at 0% contained. #AlisoFire

Many evacuated residents said they were well aware of the danger.

Costa Mesa High School's prom at Soka University of America was postponed a week due to the fire, according to school officials.

Top of the World and Old Top of the World Neighborhoods are under Immediate Evacuation Order due to the fire danger from the #Alisofire. Care and reception center established at the Susi Q Center, 380 3rd Street. pic.twitter.com/AEJdSl8XjT

-All neighborhoods along Alta Laguna Boulevard and down Park Avenue to Bern Drive and Temple Hills Drive to Dorn Court.

-The Susi Q Center, located at 380 3rd Street in Laguna Beach, for food and shelter. Animals are welcome.

-A Red Cross shelter at Aliso Niguel High School, located at 28000 Wolverine Way in Aliso Viejo. Additional parking is available at the Ziggurat building in Laguna Niguel at 24000 Avila Road.