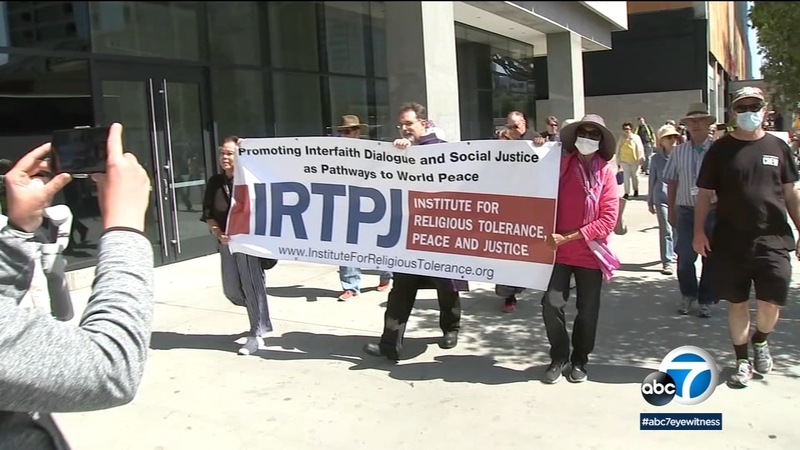 LAGUNA WOODS, Calif. (KABC) -- One week has passed since the deadly mass shooting at Irvine Taiwanese Presbyterian Church in Laguna Woods. On Sunday, the Orange County congregation came together to call for peace and tolerance.

It was the seventh annual Interfaith March held each year for peace and tolerance.

"This event is an antidote to all intolerance, bigotry and violence in the world... to build infrastructure between potential allies and friends, to help dissolve and disarm the hatred and intolerance that we see every day," said Dr. Arik Greenberg, a Loyola Marymount University professor of world religions, and founder and president of the Institute for Religious Tolerance, Peace and Justice.

According to the Anti-Defamation League, these incidents include vandalism on businesses, schools, and places of worship and even in-person harassments and assaults.

The Geneva Presbyterian Church, which shares the same campus as Irvine, returned to church Sunday with a special service focusing on inclusivity and healing.

Investigators say the suspect in the Laguna Woods shooting opposes Taiwanese independence and he targeted Irvine Taiwanese Presbyterian because it is a Taiwanese congregation.

Organizers and churchgoers stressed the importance of people being allowed to practice any religion of their choosing, or no religion at all, without fear of reprisal, discrimination or abuse and to advocate that all religions, large or small, be given equal justice and equal protection under the law.